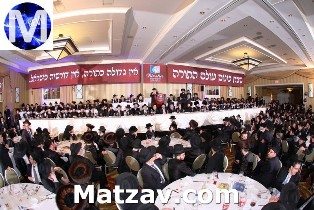 The Dirshu Shabbos Chizuk L’lomdei Torah to be held on Shabbos Parshas Vayeitzei at the DoubleTree Hotel by Hilton in Somerset, NJ, will be attended by Gedolei Yisrael from both America and abroad. Hundreds of Dirshu members, and non-members, will participate in this special Shabbos honoring the phenomenal accomplishments of participants in the Dirshu programs of Limud HaTorah.

The Shabbos Chizuk will be graced with the special participation of HaGaon HaRav Shmuel Yaakov Borenstein, shlita, who will be coming from Eretz Yisrael specifically to participate and address the special Shabbos gathering.

The Shabbos Chizuk L’lomdei Torah is already sold out! Just a few weeks after Dirshu announced the upcoming Shabbos at the DoubleTree Hotel in Somerset, NJ-a new, much larger venue than last year’s Shabbos Chizuk L’lomdei Torah-the event was already completely sold out. The joy and the buzz from last year’s Dirshu Shabbos Chizuk was so positive that Dirshu received numerous requests from Dirshu members and non-members alike asking to participate in this year’s Shabbos, who desired to be part of what will be a truly memorable Torah Shabbos.

In solidarity with the Dirshu Shabbos, Rav Berel Povarsky, shlita, who spoke at last year’s Shabbos Chizuk and enhanced its great joyousness, wrote emotionally, “My nefesh so much desires to be together with you at this holy time . . . in the honor of the Torah and the Kiddush Shem Shamayim.”

Rav Shmuel Yaakov Borenstein, shlita, the renowned rosh yeshiva of Yeshiva Kiryas Melech in Bnei Brak, is known for his brilliance in Torah and comprehensive shiurim. Rav Borenstein served as a R”M at Yeshiva Nachlas Dovid in Petach Tikvah and then as a rosh yeshiva at Yeshiva Chevron, Geulah for twenty years with HaGaon HaRav Chaim Sarna zt”l. With the founding of Kiryas Melech in Bnei Brak, he was invited to serve as rosh yeshiva.

Rav Borenstein is one of the most prominent talmidim of the Chevroner Yeshiva where he himself learned many years, and of Rav Chaim Shmulevitz zt”l where he was involved in the preparation of Rav Chaim’s seforim, Shaarei Chaim. He was also one of the most prominent talmidim of HaGaon HaRav Yitzchok Hutner zt”l at Yeshivas Beis HaTalmud-Gur Aryeh. Rav Borenstein is the author of several important sefarim including collections of his Shiurim on several masechtos of Shas.

This year’s Shabbos has a particularly timely emphasis. The participation of Rav Shmuel Yaakov Borenstein, shlita, is especially poignant and vitally relevant in light of the situation and contemporary issues in Eretz Yisrael today.

The Dirshu Shabbos Chizuk will in fact focus on guidance from Gedolei Yisrael and will directly address the difficult and precarious situation in which acheinu bnei Eretz Yisrael find themselves as a result of the present Israeli government’s assault on the Torah way of life lived by charedim l’dvar Hashem.

According to Rabbi Aharon Gobioff, Director of Dirshu’s operations in America, “The Gedolei Eretz Yisrael will be communicating an urgent message to the American Torah community with regard to the difficult situation in Eretz Yisrael. It is something that every serious ben Torah is anticipating and ready to implement.”

In their messages to lomdei Dirshu of America, many of the Gedolei Yisrael who wrote letters in advance to honor the special Shabbos, specifically mentioned the gezeiros in Eretz Yisrael and suggested undertakings that the lomdei Torah of America can do on the spiritual plane to help neutralize those difficult decrees.

Many of the Gedolei Yisrael who sent their enthusiastic heart-felt blessings noted the significance of the Shabbos Chizuk L’lomdei Torah celebration of Torah learning and its honor and joy on such a magnificent scale as being truly meaningful now.

The words from the letter by the Mirrer Rosh Yeshiva, the Gaon and Tzaddik, Harav Aryeh Finkel, sending his blessing and encouragement to the Shabbos Chizuk participants, might encapsulate that message, “Especially now, when it is an eis tzarah, when haters make it difficult for those who learn Torah… it is the obligation of every one of us to strengthen each other by reinforcing our commitment to Torah learning and davening… this will bring honor and praise to the people of Hashem everywhere! May we soon witness the revelation of Hashem’s malchus for all to see with the coming of Mashiach bimheira b’yameinu.”

HaGaon HaRav Dovid Cohen, Rosh Yeshiva of the Chevron Yeshiva, noted “It is such good news to hear that hundreds of great talmidei chachamim who have toiled in Torah and acquired a clear, in-depth knowledge of Shas, poskim, horaah and halacha [are coming together for a Dirshu Shabbos Chizuk L’lomdei Torah] . . . This news is especially gratifying today when so many have designs against those who learn Torah, shaming and ridiculing them in a clear, diabolical attempt to lessen the paramount importance of Torah learning which is so precious to the soul of Klal Yisrael . . . ”

In fact, Rabbi Moshe Tzadka, Rosh HaYeshiva of the Geula branch of Yeshivas Porat Yosef expressed the wish and blessing that in the zechus of Dirshu’s activities of chizuk of Torah and the study of Halachah, so well-known in Eretz Yisrael, “that it be Hashem’s will that it should be a zechus and a chizuk in in Eretz Yisrael where there are those who wish to destroy the Torah, chas v’shalom.” Instead, he wrote, the Shabbos Chizuk, “should be mechazek the light of Torah,” in Eretz Yisrael , and, “may it be Hashem’s will that all the gezeros against the Torah be annulled.”

Rav Yitzchok Scheiner, Rosh HaYeshiva of Kaminetz, in his letter of blessing to all of the Shabbos Chizuk’s participants, praising Dirshu’s activities and particularly the Daf HaYomi B’Halachah program, noted its importance, “and in particular in this time of persecution of Torah, it is vital that every person be moser nefesh to be mechazek this holy institution and everything connected with it.”

When Rav Dovid Soloveichik, shlita, was asked what the American Torah community can do to help, he prefaced his words by telling the senior members of Dirshu’s hanhala led by its Nasi, Rav Dovid Hofstedter, “You are doing amazing things, literally amazing work. You are building Torah in the world. What could be better than that?!” Rav Soloveichik called on the American community to strengthen itself in learning Halacha. He said, “Every day, in the tefillah of Ahava Rabbah, we beg Hashem to ‘Install in our hearts to understand and elucidate… to perform and fulfill….’ ”

In their letters to the participants in the Dirshu Shabbos, other gedolim similarly stressed the imperative to bring daily practical halacha learning into one’s life, and the obligation for a Jew to learn halacha every day.

Special Events at a Very Special Shabbos-and After!

One of the high points of this year’s Shabbos Chizuk L’lomdei Torah will be that Dirshu will again be presenting what was one of last year’s most enjoyable, spiritually enlightening events, the open Shailos and Teshuvos session with the well-known posek, HaGaon HaRav Yechiel Michel Steinmetz, shlita, the Skverer Dayan of Boro Park. The Dayan’s encyclopedic knowledge of both halacha and its practical application to questions of modern medicine, technology and the like, kept the audience riveted and begging for more.

Additionally, one of the most inspirational moments of the Shabbos certainly promises to be the Shalosh Seudos where a number of Gedolei Yisrael will address the crowd. The Shalosh Seudos is expected to stretch for a considerable amount of time into Motzoei Shabbos and culminate in great shared communal simchah.

Dirshu’s Director of operations in America, Rabbi Aharon Gobioff, notes, “Making the drashos given after Shabbos available to the wider community helps us fulfill Dirshu’s mission to bring chizuk in Torah and enrich Klal Yisrael.”