Rav Avrohom Schorr, rov of Khal Tiferes Yaakov of Flatbush, delivered strong remarks over Sukkos regarding those who possess cell phones with text messaging capability, stating that such individuals should not daven in his bais medrash. Rav Schorr’s shul is currently situated next door to Yeshiva Ohr Yitzchok, off of Avenue L in Flatbush.

Rav Schorr also wrote a note stating that bochurim who have cell phones that have the text messaging feature should not come to his bais medrash to learn. An image of the note can be seen below: 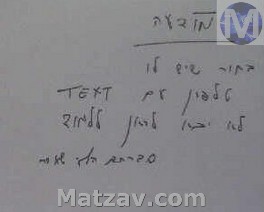