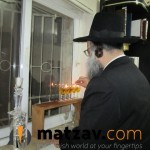 1 – At What Point is the Flame No Longer a Flame?

Rav Huna says (Shabbos 21a) that one is not allowed to light the Chanukah candles with inferior wicks or oil. Why? Rava explains: “because he holds kavsah zakuk lah.”

On this, Rashi writes, “zakuk lah – l’taknah”. This seems peculiar. The word l’taknah means to fix it. Why didn’t Rashi just say l’hadlikah, to relight it? Furthermore, Rashi adds there, “therefore he must initially make the candle properly, because, if not, we are concerned that he will be negligent and not fix it.” On this both the Pnei Yehoshua and the Beis Ha’Levi ask: are we talking about reshaim who don’t care about the mitzvah?! And if we are, then they won’t light Chanukah candles to begin with?!

The Beis Ha’Levi’s approach to this is based on a Rashi on daf 44a where he says that the word kavsah does not necessarily mean that the flame is totally out, but that it is in the process of going out.

That pshat is practically a must from the Gemara itself over there which discusses whether or not one violates the prohibition of mechabeh on Shabbos by putting out a flame which is kavsah. Obviously, if the flame is completely out, there is nothing to talk about.

In any event, the Beis Ha’Levi says a tremendous chiddush based on that Rashi: once the flame is dark and is going out, it is already as if it is totally doused and there is no more mitzvah even though there is still a flame there; the reason being that such a flame has no beauty and is not at all recognizable as being for the mitzvah. (What this is most probably referring to is when there is only a blue light coming out of the candle, without any yellow or orange).

Therefore, concludes the Beis Ha’Levi, Rashi says l’taknah – that one is obligated to fix the candle (according to Rav Huna), because even though there is still a flame there, it is a worthless flame and must be fixed. And that is why we are concerned that he may be negligent, because he may mistakenly think that this dark little flame is sufficient.

Perhaps we can utilize the Beis Ha’Levi’s inference from Rashi on 44a to posit another approach to understanding Rashi here on 21a, without being forced to be mechadeish that the mitzvah is already gone when the flame is very small and on the way out. Many take issue with that assertion.

As such – according to Rav Huna – what would we say about a situation where the flame went out and it took a minute until he managed to relight it? Yes, he took immediate action and he did what he was supposed to do, but what of those few moments that the flames were not burning? Those moments of the shiur ad sheh’tichleh regel min ha’shuk (which, according to the Rif, is half an hour) are gone. Lost. It is a meuvas lo yuchol liskon.

Therefore, according to Rav Huna, one is obligated to fix the flames as soon as he sees that they are getting low and going out. Not because such flames are tantamount to no flames, but rather because if he waits until they actually go out, he will lose those few moments of mitzvah-fulfillment. Therefore, according to Rav Huna, he is not allowed to use inferior wicks and oil since we are concerned that he may be negligent regarding this obligation to fix an on-the-way-out flame.

2 – Defining the Obligation of Ner Chanukah

Two people share a house, and one of them unilaterally puts up a mezuzah. If the second wants to put up another mezuzah – he cannot do that, and if he does it is probably a violation of bal tosif. Very likely, he also does not have a fulfillment of the mitzvah, but he becomes patur from the mitzvah by dint of the fact that there is a mezuzah already on the house. Mezuzah is a mitzvah of accomplishing a particular objective, and the objective was already accomplished.

Ner Chanukah, though, is not like that. When the baal ha’bayis lights, everyone gets their fulfillment of the mitzvah through his lighting.

How do we know that this is the case? The halacha of a guest.

A guest is obligated to pay the baal ha’bayis a bit of money to get a partnership in the candles, and if he does not do so, he does not fulfill his mitzvah.

So we see, even though the house has a Ner Chanukah, he is not patur from the mitzvah. He has to somehow get a part in it.

We see, then, that everyone in the home has an obligation of lighting Ner Chanukah. The permanent household members are automatically subsumed in the lighting of the homeowner, and a guest needs to proactively do something (pay money) in order to get his part in that lighting.

The Rishonim ask why we say l’hadlik in the bracha of Ner Chanukah, since al mitzvas is the appropriate nusach when it is something that can be done by someone other than oneself. The Ramban answers that the homeowner’s lighting is considered that the guest is lighting. It is his hadlakah. This underscores the above point; that – although it is not necessary to employ any specific mechanism such as shomeiah k’oneh or appointing a shaliach – the lighting of the homeowner is considered that all the household members lit. That is the takanah of ner ish u’beiso.

The word bayis does not necessarily mean house, but can mean household, as in vayishma beis Paroh. It means that the people of Paroh’s household heard; it doesn’t mean yeish aznayim la’kir.

A homeless person does not light Ner Chanukah. We don’t find such an obligation anywhere in hilchos Chanukah.

Tosafos asks why Chazal only enacted a bracha for someone who sees Ner Chanukah (under certain circumstances), whereas there is no birchas ha’roeh for other mitzvos. One of the answers Tosafos suggests is that there are many people who do not have a home and therefore cannot fulfill the mitzvah of Ner Chanukah. Tosafos, though, rejects this answer because what about mezuzah? Why didn’t Chazal enact a birchas ha’roeh for homeless people when they see a mezuzah?

The Rambam, though, seems to hold differently. The Rambam writes that one is not obligated to live in a house in order to fulfill the mitzvos of mezuzah and maakeh, unlike mitzvos such as teffilin and lulav regarding which it is an absolute obligation to fulfill them. The Rambam then extends this distinction of absolutes vs. non-absolutes to mitzvos d’Rabbanan as well. Washing, the Rambam gives as an example, is not absolute, because you don’t have to eat bread (most days) in order to obligate yourself to wash. In the list of examples of absolutes in mitzvos d’Rabbanan, the Rambam includes Ner Chanukah.

You see, then, that the Rambam holds that a homeless person is obligated to see to it that he finds a home to live in during Chanukah in order to fulfill the mitzvah of Ner Chanukah. The other option, if you are perhaps so inclined, is to say that the Rambam would hold that he has to light wherever he happens to find himself, even on a park bench.
But we do not find such an option anywhere in hilchos Chanukah.

The Ran also seems to imply that Ner Chanukah is inextricably bound up with a home. He says that the chiddush of the obligation of a guest in Ner Chanukah is that you should not think that it is like mezuzah. If one lives in a Jewish-owned home for a few days, he is not obligated in mezuzah unless he is a renter. When it comes to Ner Chanukah, though, even though he is only a guest, he is obligated.