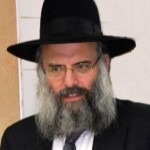 Everybody asks the question, why is the teffilah of a tzadik ben tzadik greater?  We would have thought that the tzadik ben rasha should have a greater teffilah since Chazal say that even perfect tzaddikim are unable to stand where baalei teshuva stand.

There is a famous answer from Rav Chaim Shmuelevitz that for the tzadik ben rasha it is inherent that he will have his own unique personal connection to his avodas Hashem since, after all, he had to swim against the tide to get to where he is.

The tzadik ben tzadik, on the other hand, lives with the difficulty of finding his own approach.  When a tzadik ben tzadik overcomes the natural tendency of simplistic imitation and instead carves his own niche, his own new unique approach – both in terms of his understanding of Torah as well as in avodas Hashem; everything should be alibah dideih – that is a supreme accomplishment that makes his teffilah more effective.

In Orach Chaim siman 53, the Tur brings in the name of the Rosh that the selection of a Chazan is not contingent on the individual’s yichus.  Rather, if the person himself is a tzadik, we do not hold it against him if his family stock happens to be degenerate; it is good to bring close the offspring of the distant, as the pasuk says, “Shalom shalom la’rachok v’la’karov.”

There is a machlokes between the Maharshal and the Taz how to understand this statement of the Rosh.

The Taz, on the other hand, argues.  He says that the reading of the Rosh’s words clearly implies that even when all else is equal, we select the tzadik ben rasha, because that is precisely what we learn out from the pasuk that places the “rachok” before the “karov”.  We deliberately give him first choice, emphasizes the Taz, in order to bring him closer to the Shechina, and because “Rachmana libah ba’eih, Hashem desires the heart,” and his teffilah will be more effective.

An insight – b’derech drush – in understanding the opinion of the Maharshal is as follows.

Chazal tell us that each and every person is obligated to say, “When will my deeds reach those of my ancestors”.  This is not only talking about the Avos Ha’Kedoshim.  Every generation experiences a lowering of stature from the previous one.  Yeridas ha’doros.  The Brisker Rav said – and he was known as a person who completely eschewed exaggeration – that the beinonim, the average people of the previous generation were greater than the Gedolim of this generation.  Of course, the Brisker Rav was talking about beinonim in accordance with his scale, but the point is still very clear.  Even regarding the generation immediately preceding one’s own, there exists this important charge of “When will my deeds reach those of my fathers”.

A tzadik ben rasha can be lacking the type of internal push that this charge is meant to generate.  After all, he has long surpassed his father’s deeds!  He can be inclined to “patting himself on the back” for where he is holding.  And rightfully so!  But, at the same time, the fact is that the lack of being able to look back to his own father and grandfather, etc. and feel a need to work hard to try to reach their level can allow room for complaceny and a lack of feeling an urgent need to keep growing more and more.

Paranthetically, this internal push is a very important mechanism for one’s growth in avodas Hashem.  Rav Shlomo Heiman – whose whole approach to learning very much centered around the Torah of Rabi Akiva Eiger – once said about himself, “All my life, I strove to become like Rabi Akiva Eiger.  Had I not had that as my goal and aspiration, even Shlomo’leh I would not have become.”  Did he reach Rabi Akiva Eiger’s greatness?  Of course not.  He didn’t even reach Rabi Akiva Eiger’s ankles.  But his shooting high is what enabled him to achieve what he achieved.

Rav Bunim mi’Peshischa said a novel explanation of the words “masai yagiu” (when will they reach).  He said yagiu is mi’lashon negiah, touching.  According to the Peshischer, our aspiration is to at least touch the greatness of our ancestors.  Halevai!

A tzadik ben tzadik feels this push strongly.  “Oy,” he thinks to himself, “I am nowhere near the greatness of my ancestors…what is going to be with me?!”  And, then, when he davens “please give us understanding” and “please save us”, and so on, it is with a sigh and a groan, with a sense of urgency and need.  His is therefore a teffilah from the depths of the heart.

When one davens for Torah, by the way, there is a garauntee that Hashem will answer affirmatively.

In this context, it’s important to point out that one should not set low standards for oneself.  One should never fully accomplish his objectives.  Having one’s sights set high provides him with continuous motivation and drives him to always strive and work for more and more.

(Ed. note: see Vayigdal Moshe on Shavuos [available in audio here] that Rebbi said, “When one takes something on, it should be specific, concrete, and practical.  Not a migdal poreiach ba’avir.  It needs to be something that one truly has the ability to maintain.  Our kochos are far, far removed from anything resembling the kochos of the previous generation.  The goals we set for ourselves need to be modest in accordance with our modest capabilities.”  This would seem to contradict, at first glance, what Rebbi said on this week’s parsha.  However, perhaps the resolution is that there is a dichotomy between one’s abstract, inner, overarching aspirations versus the concrete, practical undertakings that one assumes.  The former should be as high as possible, whereas the latter must be in accordance with what realistically is workable.  Of course, the inner aspirations will necessarily push one to consider his practical undertakings from a vantage point that he may have otherwise not seen.)

Understanding that Hashem blessing Avraham avinu “ba’kol” and that Yaakov avinu saying that he has “kol” is referring to mei’ein Olam Ha’Bah is not so difficult.  We can see how such an implication could be read into those expressions.

But what about the “mi’kol” of Yitzchak avinu?  The pasuk is talking about the food that he ate, so how can we understand that as a reference to mei’ein Olam Ha’Bah?

This is a deep concept, but I will try to convey it in a relatively simple way.

Ha’Kadosh Baruch Hu is the one who provides everything.  He, and He alone, is the mashpiah.  However, He employs various conduits – pipelines and pathways, if you will – through which He delivers provisions to every individual.  As Chazal say, “the Omnipresent has many messengers.”

When something comes through a pipeline or pathway, you cannot always see all the way until the other side.  You cannot always see from one end to the next.  As such, it is possible to lose sight – through all the myriad situations of life that demand human effort and intervention – of the fact that it is Hashem alone who is the provider of everything.

This obfuscation of reality, though, is only a function of Olam Ha’Zeh.  Olam Ha’Bah, on the other hand, is a realm of complete and absolute clarity, as Rabi Yehoshua ben Levi said to his son Rav Yosef after the latter was resurrected and brought back from the next world (Pesachim 50a), “Olam barur ra’isah, You saw a crystal-clear world.”

Part of the teffilah of the Kohen Gadol on Yom Kippur was, “Klal Yisrael should not be in need of one another, nor should they be in need of any other nation.”  That we should be completely independent as a nation, we can readily understand.  But what does it mean that we shouldn’t need one another?  Is there some benefit in a person planting all his own grain and vegetables, or sewing all his own clothes?!

Some of the great Baalei Avodah explained that what “Klal Yisrael should not be in need of one another” means is not that each person will do every task under the sun for himself, rather that the functioning of the world should be clear to them that everything is from Ha’Kadosh Baruch Hu.  They should not experience it as if they are in need of others, because they perceive that it is all from Hashem.

“Kol” is the term that expresses the fact that it is really all Ha’Kadosh Baruch Hu.  For the Avos Ha’Kedoshim, there was no lack of clarity.  In everything that happened in their lives, they clearly perceived the yad Hashem, that it is Hashem who is “poseiach es yadecha u’masbiah l’chol chai ratzon”.  They lived with this existence of mei’ein Olam Ha’Bah, akin to the total clarity that exists in the realm of Olam Ha’Bah.