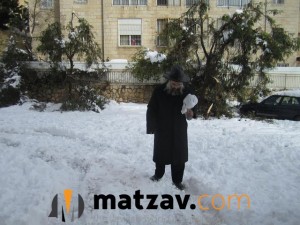 The best way to be careful from forbidden gazing and thoughts is by occupying the mind with divrei Torah.  Rav Wolbe writes in Alei Shur that when one thinks in learning, it is a koach that can protect him from seeing pritzus.

We see from here that to a great extent what one sees goes according to what his mind is occupied with.

Therefore, whenever one is about to go out onto the street, one should prepare divrei Torah to think about.  (Often, a concept or kashya to ponder – something about which you can think in depth – can be preferable to chazara from which it can be easier to become distracted).

(From the notes of Reb Matis Feld)

Generally speaking, in Eretz Yisrael we don’t have the merit to experience the challenge of really bad weather.  However, when we are zocheh, on occasion, to have this challenge, we should embrace it with a great simcha shel mitzvah; and run to the Beis Medrash with great enthusiasm!

Rav Baruch Ber of Mezibuzh said: “When it comes to our own yissurim, we must have emunah. But when it comes to the yissurim of others, one must be nosei b’ol and feel their pain!”

The Rokeiach says that the 36 neiros of Chanukah correspond to the 36 hours that the hidden light shone during the six days of creation.

There are three points at which we find the ohr ha’ganuz. The first is day one of creation when Ha’Kadosh Baruch Hu created it. Immediately, though, He hid it away. On the sixth day when Adam was created, the hidden light emerged. Although it really should have been hidden away immediately when Adam sinned, it stayed for Shabbos – making a total of thirty six hours.

Rashi says the first day of creation is called yom echad as opposed to rishon, because there was only Yechido shel Olam. What that means is that there was a state of ein od milvado in the most literal sense. There was an absolute clarity of the reality of Hashem’s oneness. Likewise, l’asid lavoh will be a state of Hashem echad u’Shmo echad, of Hashem hu ha’Elokim.

And what brings the briah from one point to the next? Adam. That is why the ohr ha’ganuz came out when Adam was created. Although we cannot fully grasp the ohr ha’ganuz for the time being, our actions are what gradually lead towards it, and allow us to get a sense of it even now.

The Rokeiach revealed to us that this inyan of ohr ha’ganuz is in Chanukah. The Chashmonaim reached a very high level of awareness of ein od milvado. That is what empowered them to be moser nefesh against all odds.

Every day of Chanukah this is revealed. At the time of lighting the neiros, or perhaps through the lighting of the neiros. So let’s try it. Taamu u’reu. Let’s see if we can get a chizuk in emunah each day with the hadlakas neiros Chanukah.