It is with great sadness that Matzav.com reports the petirah of Hagaon Rav Moshe Shapiro zt”l, noted rosh yeshiva, mechaber seforim, and baal machshavah. He was 82.

One of the greatest Torah thinkers of our time, Rav Shapiro had battled head and lung-related difficulties and other ailments and was hospitalized at Hadassah Ein Kerem Medical Center in Yerushalayim. He passed away on Motzoei Shabbos.

Rav Shapiro was born in Tel Aviv on 26 Teves 5695/1935 to his parents, Rav Meir Yitzchok and Rebbetzin Rochel Shapiro. His father, Rav Meir Yitzchok, was a talmid of the Alter of Slabodka and mashgiach at Yeshivas Nachlas Dovid.

In his youth, he studied at Yeshivas Chevron and established a relationship at that time with the Brisker Rov, Rav Yitzchok Zev Soloveitchik zt”l. He then learned at Ponovezh Yeshiva in Bnei Brak, where he established a close kesher with the mashgiach, Rav Eliyahu Eliezer Dessler zt”l, with whom he learned bechavrusah. He also studied under the Brisker Rov’s son-in-law, Rav Yechiel Michel Feinstein zt”l.

When he reached the age of marriage, he wedded his rebbetzin, Tzipora, a daughter of Rav Aharon Bialistotzki, rosh kollel of Kollel Ohel Torah. He and his rebbetzin had five children. They resided in Bayit Vegan, Yerushalayim.

During his lifetime, he held a number of positions, including as rosh yeshiva of Yeshivas Bais Binyomin of Stamford, CT, together with Rav Simcha Schustal zt”l.

He then served as R”M at Yeshiva Bais Hatalmud in Sanhedriah, Yerushalayim, and was among the first mashpi’im and maggidei shiur at Yeshiva Ohr Someiach in Yerushalayim for chozrim b’teshuvah. He delivered a popular weekly Chumash shiur each Thursday night that drew large crowd of attendees who came to drink from wellsprings of Torah knowledge for which Rav Shapiro was famous.

He also headed a Kollel Avreichim established by the Wolfson Foundation and served as the menahel ruchni at Yeshivas Toras Chaim together with Rav Alexander Eisenstadt.

In 2001, he established Yeshiva Shev Shmaatsa. The roshei teivos of the name of the yeshiva stand for the name of his daughter, Shulamis Shapiro, who passed away at a young age. He also headed Yeshiva Pischei Olam for chozrim b’teshuvah.

Rav Shapiro was a boki in the seforim of the Maharal and sifrei chassidus, including the sefer Mei Hashiloach from the Izhbitzer and the seforim of Rav Tzadok Hakohein of Lublin. In his shiurim and sichos, his wealth of knowledge in divrei Chazal, Shas and Medrash, along with sifrei Kabbolah and machshavah, was on full display.

Rav Shapiro was known for his phenomenal memory, citing passages from all over Tanach, Shas and other sifrei kodesh by heart, verbatim. His shiurim and drashos were delivered in Hebrew, English and Yiddish, in whatever dialect or pronunciation was suitable for his particular audience. He was thus able to influence tens of thousands of people of various continents like few others. At certain junctures, he was delivering well over 30 shiurim and drashos each week.

Thousands consider themselves talmidim of Rav Shapiro, turning to him as their rebbi and manhig.

Despite his greatness, he was humble and refined, trying to escape honor and accolades while fully engaged in harbotzas Torah. Those privileged to meet him were struck by his princeliness, his dignified demeanor, his articulateness and his majestic personality. He carried himself as a proud servant of Hashem, creating a true kiddush Hashem just by the way he appeared.

His seforim, published by talmidim, include Afikei Mayim on the moadim, Mimaamakim al haTorah, Raah Emunah on the Yud Gimmel Ikrim, and other volumes.

Rav Shapiro is survived by his wife, Rebbetzin Tzipora Shapiro, and children and grandchildren following in his ways. Likewise, talmidim of the venerated gadol baTorah all over the world are mourning the loss of this unique Torah giant.

The levayah will be held on Sunday, Asarah B’teves, at 11 a.m. at Bais Medrash Mishkan Moshe, located at Rav Meir Chodosh 12, corner of Rechov Chazon Ish, in Ramat Shlomo, Yerushalayim. Kevurah will follow on Har Hazeisim. 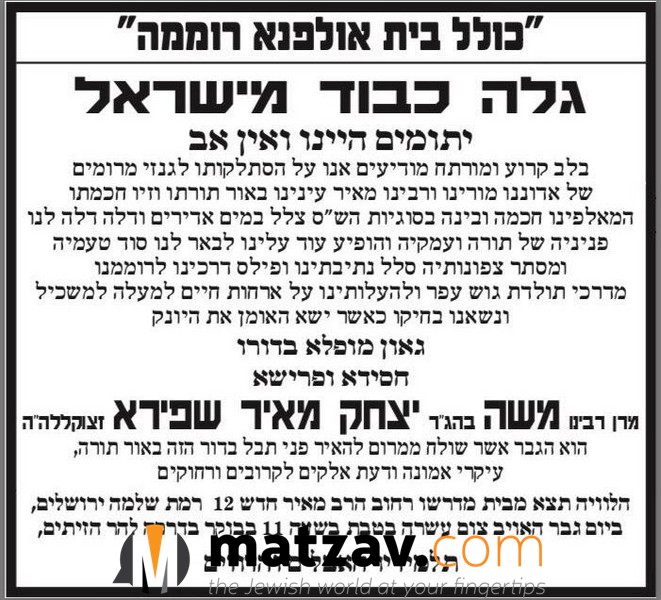 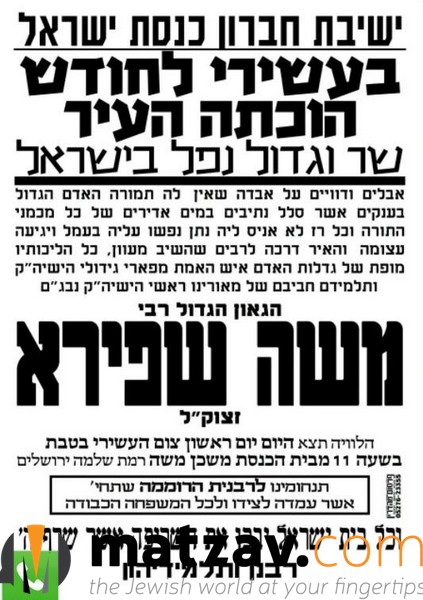