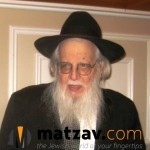 It is with great sadness that we report the passing of Rav Michoel Yosef Wolpin zt”l, who passed away on Wednesday night at the age of 87, bringing to a close a life of Torah and avodas Hashem.

Rav Michoel was born in 1928 in Seattle to Reb Efraim Bentzion and Kaila Wolpin, who had immigrated from Russia. Rav Michoel was considered a child prodigy, soaking in everything he learned with unbelievable accuracy. He became the youngest student to receive a diploma from the Seattle Talmud Torah in its 40-year history.

After studying each day at the local public school, he learned for a few hours each day with Rav Boruch Shapiro, a talmid of the Ohr Somayach and the Rogochover Gaon who was serving as a rov in Seattle.

At age 16, Rav Michoel joined Yeshivah Torah Vodaas in Brooklyn. He married his wife, Fradel, nee Selig, in 1952, and joined Rav Shraga Feivel Mendlowitz’s Bais Medrash Elyon in Monsey, NY. He was, at the time, one of perhaps two dozen kollel yungeleit in the entire United States.

Rav Michoel and his rebbetzin later moved to Williamsburg, and subsequently, to Boro Park.

Rav Michoel was an outstanding masmid, and, when not involved in his job, could be found learning Torah. He completed Shas numerous times. In his last years, he spent much of his time learning at the Kamenitzer Kollel in Boro Park.

The family is sitting shivah at 1646 56th Street, between 16th and 17th Avenues, in Boro Park until Wednesday morning.