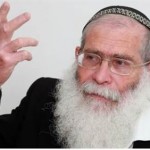 Rav Elyakim Levanon, rosh yeshiva of Yeshiva Elon Moreh, said tonight that the murderers of Mohammed Abu Khder should be given the death penalty, even if they turn out to be Jewish.

“Unfortunately it appears that Jews were involved in this matter,” Rav Levanon said to his talmidim tonight, according to Arutz Sheva. “Halacha has no mercy for the perpetrators of crimes like murder, whether of Arab or Jew, whether by Arab or Jew.”

“In this case, it would be proper to impose the death penalty on the murders of Abu Khder,” Rav Levanon said. “We will thus fulfill the precept of ‘Ubiarta hara mikirbecha – You shall remove the evil from your midst,’ a Biblical command. Israel and its army and security services, are required to fight terror mercilessly, until it is removed from the world,” he added.