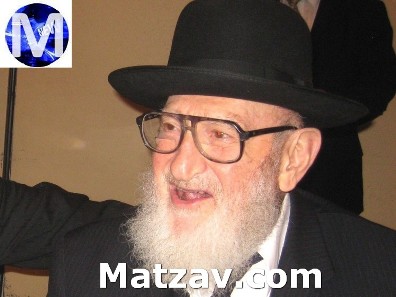 It is with great sadness that we report the passing this afternoon of Rav Hirsch Diskind zt”l, longtime dean of Bais Yaakov School for Girls in Baltimore and son-in-law of Rav Yaakov Kamenetsky zt”l.

Until 1945, the Talmudical Academy of Baltimore only went to the eighth grade. In that year, TA opened a high school, and Rabbi Hyman Samson, the rosh yeshiva, contacted Rav Yitzchak Hutner at Yeshiva Rabbenu Chaim Berlin and asked him to send a talented and promising teacher, who would be a rebbi for the eighth grade and, most importantly, a very responsible person to serve as mashgiach of the dorm. Rav Hutner was impressed with many Baltimore boys who came to study at Chaim Berlin, finding them to be refined and promising talmidim. He recommended one of his best students, Rav Hirsch Diskind.

Rabbi Samson offered Rav Diskind the position, and he started by supervising 20 students living in the dormitory, situated above the auditorium at TA’s Cottage Avenue location. Some of the early dorm residents included Aaron Feldman, Leonard Leib Heyman, Gil Shoham, Harry Hoberman, and from Washington DC, Ezra Novak, and Jason Green. Other classmates living in Baltimore were Harry Rashbaum, Joshua Hertzberg, Norman Nachman Klein, and Shmuel David Siegel. The first graduating class was the class of 1947.

In 1946, Rav Diskind learned to drive a car, and purchased a fire engine-red ’39 Plymouth. It had windshield wipers in both front and back. It had speakers in both front and back. Two weeks after Pesach, the car had a flat tire on the corner of Violet and Park Heights Avenue. Old TA students who studied at Cottage Avenue will recall the spot: right in front of Kessler’s Deli. Four students fixed the flat tire on a very hot day. To reward those hardworking talmidim, Rav Diskind packed his car with the four of them – Zev Hoberman, Ezra Novak, Leib Heyman, and Eitan Green – and they set out, after school, for a country drive way out Park Heights Avenue (probably to exactly where Bais Yaakov is today) for an afternoon excursion. As they returned to school that evening, another flat tire occurred – and now there was no spare. It became very dark, extremely dark, absolutely pitch black. To make things worse, the heater was not working. They were not aware that there was a filling station not far down the road. It was too dangerous to walk, so they decided to stay with the car overnight.

At daybreak, after a chilly night sleeping in the car, they walked and found the filling station, which repaired the tire. Rav Diskind’s goal was to get back before davening so as to not alarm the school about the missing bachurim. With the tire fixed, the packed car raced down Park Heights, and right next to the Surburban Country Club, an exhausted Rabbi Diskind hit the side of the road, and the car fell into a ditch and rolled over. Miraculously it landed back on its tires next to a pond at the side of the road. It was truly a nes that, except for a few bruises and scratches, all were okay.

Not so the car. It was towed by Klein’s Auto Works, where Mr. Klein, father of their classmate Nachman Klein, was amazed that a living soul could have emerged from that vehicle.

Bruised and bloodied, the group somehow reached TA later that day, where Rav Diskind was invited to Rabbi Samson’s office for a debriefing. The following Thursday, each passenger benched gomel. That worked out perfectly, as Zev Hoberman was a kohen, Ezra Novak was a Levi, and Rabbi Diskind was a Yisrael. Leib Heyman and Eitan Green received hagbah and gelilah.

In 1948, Rav Hutner introduced Rav Diskind to the Kamenetsky mishpacha as the perfect shidduch for their daughter Rivka. In February 1949, Rav Diskind married Rivka Kamenetsky. Soon afterwards, his reputation as a wonderful mechanach spread, and he was offered the position of principal and rebbi of a Cincinnati day school. Mrs. Diskind was also an excellent teacher; before leaving Baltimore in 1949, she substituted for Hebrew teacher Mrs. Blanche Reich, who was on maternity leave from Bais Yaakov.

In 1942, a school for girls was organized and opened in Baltimore. When Rav Diskind arrived at Bais Yaakov, in 1952, the student body had grown to 135 students, from first through ninth grade. Only a third of the students were from shomer Shabbos homes. In the 1940s and 1950s, some of the students would leave after completing the sixth grade, but some would stay through ninth grade. Just before his arrival, a class of four girls – Betty Rose Cohn (later Mandelbaum, the daughter of H.P. Cohn), Bernice Stauber, Miriam Samson, and Shirley Shapiro – had graduated from the ninth grade and gone on to Western High School. Betty Rose later attended Bais Yaakov in Washington Heights under Rabbi Shmuel Schechter, and then Bais Yaakov Williamsburg. She returned to Baltimore and taught the Bais Yaakov kindergarten, together with classmate Bernice Stauber, under the direction of Rav Diskind and Mrs. Rosenberg.

It was in 1956 that a high school was finally started, with grades ten through twelve. Accreditation was granted by the State Board of Education, and Rabbi Mayer Moshe Haber joined the staff as high school principal. Rhoda Reznitsky (now Rochkind), Minna Rosenberg (now Menucha Caplan), Esther Sagel (now Kaufman), Minna Herman, Ruth Leiter, and Miriam Berkowitz (married Rav Yisroel Belsky) were students in that pioneering Bais Yaakov class, which graduated in 1959.

In 1960 Rabbi Haber was tragically niftar, and in 1961 Rav Diskind brought in a Talmudical Academy rebbe, Rabbi Benjamin Steinberg as high school principal. (He had made Rabbi Steinberg’s shidduch with his former student, Rhoda Stauber.) Together, Rav Diskind and Rabbi Steinberg took the school to even greater heights. With the fine education it offered and its tremendous school spirit, Bais Yaakov became one of the finest Orthodox girls schools in the world.

What was Rabbi Diskind’s formula for making Bais Yaakov such a major success?

Academically, he set the highest standards for both limudei kodesh and limudei chol (Hebrew and secular studies). He brought in talented and creative administrators and mechanchim (educators) to instruct the students. He instilled school spirit and a Torah ru’ach in his students. He built the school on consistency and respect. Bais Yaakov stood on its principles. The school’s decisions were not always popular, but its agenda was free of politics and totally forthright and honest. Rav Diskind made sure that this was how the school would always operate. He followed daas Torah, often seeking the advice of his father-in-law, Rav Yaakov Kamenetsky.

Rav Diskind attributes much of the early success of Bais Yaakov chinuch to the parents’ respect for authority and discipline. He believes that this respect waned after the Vietnam War experience here in America. The turbulent protests and demonstrations were a threat to respect and authority and affected the culture of the 1960s. Back in his day, the parents left discipline to the mechanchim and did not challenge them as they often do today. The parents of that era respected the policies and integrity of the educational institutions. That respect was transmitted to the students.

In 1987, after 35 wonderful years, during which he made Bais Yaakov one of the finest girls day schools in America, Rav Diskind and his wife made aliyah to Har Nof in Yerushalayim. He kept in touch from afar by visiting the school often. He continued to educate Bais Yaakov students in Baltimore through his creative use of videos and other audio-visual media. In addition, he met with his former students when they came to study in Israel, and was in contact with former students around the world.

Rav Diskind was a talmid chacham, a master mechanech, and a very humble person, who accomplished so much in a life of Torah and yiras Hashem. Every time people spoke to him, they were spiritually uplifted. Rav Diskind gave all his kochos to educate his many students in a life of Torah, yiras Shamayim, and gemilas chasadim. He and his wife built a beautiful mishpacha. When one spoke to Rav Diskind, they heard his joy and simcha as he reflected on his wonderful career. His contribution to Klal Yisroel was truly remarkable.

The levaya will be held tomorrow at 12:30 p.m. at the Bais Yaakov High School of Baltimore.

Shivah will take place at 4001 Fallstaff Road in Baltimore until next Wednesday.

Matzav.com thanks Where, What, When, from which much of the historical information here was culled.