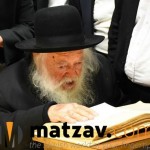 Following a recent injunction by the Ethics Committee of the Israel Medical Association (IMA) to treat patients at the scenes of terror attacks on the basis of the most pressing medical needs without regarding whether the patient is a victim or perpetrator of the attack, the question was presented to Rav Chaim Kanievsky for his feelings on the matter from a halachic standpoint.

Rav Chaim said that, clearly, if there is no doubt that the terrorist is an Arab and the victims are Jewish, then the Jewish victims must absolutely be treated first, even if the terrorist’s injury is defined as life-threatening while the Jews’ injuries are less severe.

Rav Chaim issued this ruling during a discussion with members of Hatzolah who came to his home to consultation with him on various issues.

Rav Chaim stressed that his directive applies only in a case where it is clear beyond any doubt that the person in question is a terrorist, or in cases of doubt, as has been the case during the current wave of terrorism.

Meshi-Zahav was also responding to the IMA directive that drastically changed the existing triage guidelines laid out for medical and emergency personnel at scenes of medical emergencies. Until now, patients were not prioritized solely on the basis of their injuries but also according to the principle that “charity begins at home,” essentially meaning that medical staff should attend to the needs of the victims of a terror attack before treating the terrorist, even if he or she is more seriously wounded. However, under the new guidelines, emergency medical workers are ordered to treat patients at terror attacks on the basis of medical considerations alone. What this means in practical terms is that first responders may find themselves in situations in which they are forced to treat a terrorist before tending to the victims of an attack.

The decision to change the guidelines was made as a result of a petition by Physicians for Human Rights, a group that claimed that Israel was acting in violation of international medical ethics and human rights, and following a lengthy discussion within the IMA and its Ethics Committee. Professor Avinoam Reches, the Committee’s chairman, made a statement in which he argued that “medical personnel are not obligated by Jewish moral values.”

Responding to Reches’s statement, Meshi-Zahav said, “The Jews brought morality to the world and no one will teach us what is moral…. We direct ZAKA volunteers to first treat the Jewish victims of a terror attack – without blinking an eye. Only after they have been given medical assistance, should they begin treating the murderous terrorist who carried out the attack.”