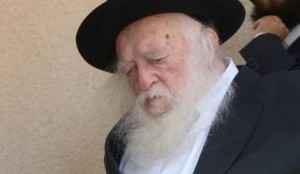 Rav Chaim Kanievsky is said to have dreamt of the petirah of his daughter, Rebbetzin Chana Shteinman a”h, who passed away this morning following an illness.

Last night, Rav Chaim woke up at 1:30 a.m. and he told members of his household that had dreamt that his daughter who was ill had passed away and that he would be sitting shivah. His family members tried to comfort him, stating that all dreams have components that are not true or sheer silliness. Rav Chaim was apparently not satisfied.

As a result, this morning, during Shacharis, which he davened kevosikin at his home on Rechov Rashbam, he performed hatovas chalom during Birkas Kohanim.

This took place prior to Rav Chaim learning of his daughter’s worsening condition. He was ultimately apprised of her deteriorating state and he immediately traveled to Yerushalayim to daven at the Kosel. A short while later, he was told of the petirah and he tore kriah at the home of his grandson in Yerushalayim before returning to Bnei Brak for the levaya.

This incident was related at the levaya by his son, Rav Yitzchok Saul Kanievsky.