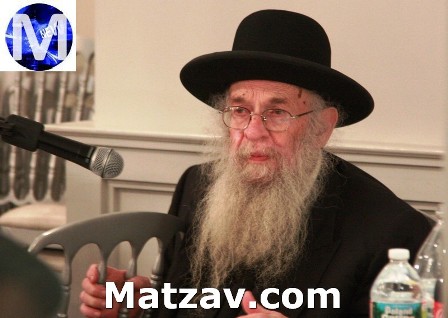 [Updated levayah info below.] It is with great sadness that we report the passing of Maran Hagaon Rav Chaim Epstein zt”l, rosh yeshiva of Yeshiva Zichron Meilich in Brooklyn, NY. He was 79.

One of the einei ha’eidah and gedolei Torah of the Diaspora, Rav Epstein was the moreh derech for tens of thousands of bnei Torah across the globe. He was one of the most prominent talmidim of Rav Aharon Kotler zt”l and carried on his rebbi‘s mesorah with great fortitude throughout his life.

The Olam Hatorah has been plunged into mourning with the petirah of this great gaon, tzaddik and manhig, who lived his life completely immersed in Torah and avodas Hashem. Rav Epstein possessed a phenomenal range of yedios haTorah, but talmidim attest that his humility hid so much of his Torah greatness. He carried himself and spoke with simplicity, not allowing others a complete glimpse of his mastery of Torah. Close talmidim relate the unbelievable breadth of knowledge that Rav Epstein possessed.

Thousands benefited from Rav Epstein’s clarity of thought and unadulterated daas Torah. They sought him out for advice and guidance in all areas, recognizing his lucid manner of thinking and his ability to break down issue after issue with the brilliance of a manhig baTorah and without any agenda whatsoever. His purity of thought and clarity of vision were unparalleled.

Gedolim themselves turned to Rav Epstein for his advice and daas Torah. Maran Hagaon Rav Shmuel Kamenetsky shlit”a, rosh yeshiva of Yeshiva Philadelphia, remarked not long ago that he would speak to Rav Epstein – who was a decade younger than him – for his thoughts and Torah outlook on various issues.

The void that has been left with Rav Epstein’s passing is difficult to quantify. He quietly and largely behind the scenes guided and directed so many aspects of the American Torah world, from yeshivos, to contemporary chinuch, to klal matters. On an individual level, he guided thousands of yechidim and families. Klal Yisroel has been left bereft, like children who have lost a loving father.

At Yeshiva Zichron Meilech, located at the corner of Ditmas Avenue and Dahill Road in Brooklyn, NY, Rav Epstein delivered riveting shiurim, known for their depth and complexity, as well as inspiring and pointed shmuessen, directing his talmidim with love and care. For over four decades, Rav Epstein served as rosh yeshiva, and he took a personal interest in his many talmidim and cherished the kesher he maintained with them, a relationship that continued for years after they left the yeshiva.

Rav Epstein’s parents were Rav Yosef Dovid and Rebbetzin Shaina Itta Epstein zt”l. Rav Yosef Dovid was a respected member of the Mir Yeshiva in Europe, where he maintained an especially close relationship with the rosh yeshiva, Rav Eliezer Yehuda Finkel zt”l, and was the mazkir, or secretary, of the yeshiva. Rav Yosef Dovid was an outstanding talmid chochom and mechaber seforim, and was highly regarded by the other talmidei chachomim of the Mir. The Epstein family spent the war years with the Mir Yeshiva in Shanghai and ultimately made their way to American shores, residing in Williamsburg.

Rav Epstein’s wife, who passed away just over four years ago on 6 Cheshvan 5771, was Rebbetzin Esther Musha Epstein a”h. Rebbetzin Epstein was born in America in 1943 to her parents, Rav Dovid and Rebbetzin Basya Bender. Rav Bender was a master mechanech and a menahel in Yeshiva Torah Vodaas, while Rebbetzin Bender was one of the pioneers of the American Bais Yaakov movement and a surrogate mother to generations of students.

Rav Epstein and the Rebbetzin got married in 1961 and then moved to Lakewood, NJ, to join the Bais Medrash Govoha kollel, then in its early years, under Rav Aharon Kotler. At the time, the Rebbetzin sacrificed greatly to enable Rav Epstein to grow in Torah and become a gadol baTorah. The move to Lakewood spelled loneliness, hardship, sacrifice and perhaps even scorn. It was far from a popular move and people saw no future in it. But the rosh yeshiva and the rebbetzin did it with happiness and grace, recognizing the great opportunity that existed. The rest is history.

The Epsteins later moved to Boro Park, Brooklyn, where Rav Epstein became known as a marbitz Torah and assumed the position of rosh yeshivah of Yeshiva Zichron Meilich. The warm, friendly and happy atmosphere of the unadorned and modest Epstein home on 46th Street was a place of comfort and chizuk for so many thanks to the greatness and sensitivity of the rosh yeshiva and his rebbetzin.

Over the years, people flocked to Rav Epstein, confided in him, and looked to him for moral and physical support. He was very smart and intuitive, with a shrewd understanding of human nature. He counseled many people in shalom bayis and other personal issues. He had no airs about him and everyone felt comfortable talking to him, thus enabling him to reach all types and relate to people on any level. To be able to relate to people of all levels while possessing such remarkable greatness in Torah was just one aspect of the gadlus of the rosh yeshiva.

In June of 2011, Rav Epstein founded Keren Ezer L’Nefesh-Chasdei Esther Musha in memory of Rebbetzin Epstein a”h. The mission of the Keren is to provide financial assistance to families of yeshiva and Bais Yaakov students who require mental health services. Working together with school faculty, Keren Ezer L’Nefesh enables mechanchim and mechanchos to make proper mental health care arrangements for those suffering from these challenges and begin the process of creating hope and instilling growth in the lives of their talmidim. The Keren has had an amazing impact and has helped so many people, all thanks to therosh yeshiva and his recognition for the need of such an organization.

Several weeks ago, Rav Epstein contracted an infection and was hospitalized. He battled the infection, which got progressively worse. Just after midnight today, Wednesday morning. Rav Epstein was niftar.

He is survived by a family of outstanding bnei and bnos Torah – his esteemed children, grandchildren and great-grandchildren – and thousands of talmidim and bnei Torah who have lost their leader, their guide, and their spiritual compass.

Rav Epstein’s only sibling, Rebbetzin Faiga Esther Finkel a”h, passed away this past summer at the age of 76.

The levaya will take place in Brooklyn, New York, followed by a second levayah in Lakewood, where the Rebbetzin is buried and where the kevurah is expected to take place. Further details will be posted once they are finalized.

May the rosh yeshiva serve as a meilitz yosher for his talmidim, for the greater olam haTorah, and for Klal Yisroel as a whole.

Update: The levayah will take place at 10:30 a.m. at Yeshiva Zichron Meilech, located at 510 Dahill Road, Brooklyn, NY. The yeshiva building will be reserved for rabbonim and relatives. Audio hookup will be provided at The Palace Hall, located at 780 McDonald Avenue.  To listen to the levayah, call 857.232.0159 and enter #900641.

The levayah will continue in Lakewood at Beth Medrash Govoha, located at 617 Sixth Street, between Private Way and Lakewood Avenue, followed by kevurah at the at the Seventh Street Bais Hakevaros in Lakewood next to the Holocaust Memorial Chapel of Congregation Sons of Israel off of East Seventh Street.

The family will be sitting shivah at 1608 46th Street, between 16th and 17th Avenues in Boro Park.

The levayah in Lakewood will take place at Bais Medrash Govoah at 5:30 p.m., followed by kevurah in Lakewood.