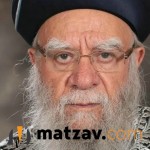 The Rishon LeTzion, Rav Eliyahu Bakshi-Doron, the 74-year-old former Israeli chief rabbi, was released from the hospital on Friday afternoon after being hospitalized for more than a week.

Rav Bakshi-Doron spent Shabbos at the home of his daughter in Yerushalauyim.

On Wednesday, Rav Bakshi-Doron was admitted to the hospital, where he underwent a series of tests and treatments.

All are asked to daven for Rav Eliyahu ben Tova Baya.