Yesterday, amidst speculation in various circles and amongst the Olam Hayeshivos, it was confirmed that Rav Avrohom Yehoshuah Soloveitchik, rosh yeshiva of Yeshiva Brisk, did attend the levaya for Rav Menachem Porush, the former Knesset member and noted askan for Klal Yisroel. Rav Soloveitcheik can be seen in the adjacent photo from HNN.co.il. The levaya left from the Agudas Yisroel building on Rechov Press, across from Yeshivas Brisk.

Also noteworthy is that Rav Porush’s levaya was reported on the front page of today’s Wall Street Journal, the largest circulation newspaper in the United States. 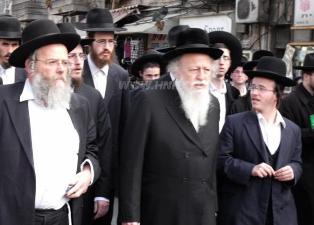 The Journal featured a large photo of a crowd at the levaya in the center of its front page, with a heading stating, “Thouasands Mourn Powerful Ultra-Orthodox Leader,” and a caption stating, Grief in Jerusalem: Jews carry the body of Rabbi menachem Porush, leader of one of the strongest ultra-Orthodox parties in Israel’s parliament, at his funeral Monday. He died of an apparent heart attack at 93.”