WNYC reports: In Borough Park, Brooklyn, ultra-Orthodox Jews this week have been gathering and eating in outdoor huts called sukkahs. The festival of Sukkot is also dubbed zman simchaseinu – “the Time of Our Rejoicing” – but for some this year, it’s also a bittersweet time.

This past summer, 9-year-old Leiby Kletzky was abducted and murdered. His confessed abductor is scheduled to be in court next week.

Kletzky’s absence this year was noticed by a local schoolteacher named Simcha, who lives next door to Leiby’s grandparents. 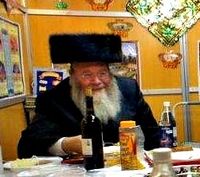 “They used to sing in their sukkah, and we all used to listen to him,” said Simcha, who like many in the cloistered neighborhood asked that his full name not be used. “We always used to point out the way he was singing, how nice it was, and my children are a little sad that he’s not around. It’s a sad, sad thing to see.”

He and others say over the last few months they’ve become more cautious about letting their kids wander as freely as they used to around Borough Park – a neighborhood that prides itself on being a small town in the heart of the big city, with everyone keeping an eye on everyone else.

Volvi Friedman, the retired owner of a prominent grocery store, said he used to let his kids head out by themselves to daily prayers at the synagogue and then off to school, starting around age 10. But not any more.”I don’t send my little kid alone in the morning,” Friedman said. “I wait until he goes with a bus. He used to walk home alone from school. I told him I’d rather he go with the bus.”

But there are also mixed signs about how protective parents are really being. One store clerk who wouldn’t give his name summed up the ambiguity saying everyone is indeed more alert than they used to be, and he’s now seeing kids with big paper name tags pinned to their shirts and jackets. But, at the same time, he’s also still seeing a lot of 5- and 6-year-olds coming into the store alone to pick up things for the family and putting it on their tab – as if nothing had changed.

Yosef Rapaport, a Borough Park newspaper reporter with 8 children and 22 grandchildren, was surprised recently to encounter a 4-year-old girl alone on the sidewalk. She approached him and asked him to help her cross the street. He helped her, of course, he said. It was the sort of thing that happened all the time before the deadly events of the past summer, but he said he hadn’t seen it since.

To Rapaport, people letting their guard back down a bit would be healthy. He said Borough Park, a community of large families, will always have scores of kids roaming around, going from house to house and store to store. He believes a certain amount of vigilance is just common sense. But because the murder was such an incredibly rare disaster, he said, people shouldn’t live in any more fear than they did before.

“I’m glad the trust is a little bit back in the town,” he said.