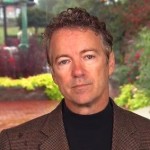 In 2011, Sen. Rand Paul told CNN’s Wolf Blitzer that he would favor a halt of U.S. foreign aid, including assistance to Israel. In August, at the height of the recent Gaza conflict, the Kentucky Republican made headlines for declaring he never proposed ending aid to the country.

Democrats and other critics seized on his sharp change in tune and blasted the likely presidential contender for flip-flopping. The criticism kicked off a wave of close scrutiny of Paul’s past statements.

On Friday, Rand spoke with Blitzer again, saying he stands by what he told him in 2011.

“Interestingly, they keep playing our interview, Wolf. So we had a great interview. But the interesting thing of it is I actually still do agree with what I told you. Ultimately, I think a country that’s $18 trillion in debt should not be borrowing money from China to send it to anyone,” he said.

He’d like to see an end to all foreign aid eventually, Paul said, reiterating a line he has used often.

“However, I think in the meantime … I’ve tried to put restrictions on foreign aid and I’ve been unsuccessful. And so I’ve come to the conclusion that maybe we should start by eliminating foreign aid from countries that burn our flag and hate us. And I think that would be a good place to start,” he said.

Pressed on whether he would continue to aid Israel in the short term, Paul said, “yes.”

“It’s an eventual goal, is to eliminate all aid,” he continued. “But we have so many — we have such a resistance in Congress to even attaching any restrictions that my goal since I’ve been in Congress and the bills I’ve introduced have been to place restrictions on countries that either hate us, burn our flag or persecute Christians or other religious minorities.”