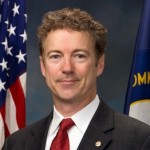 After giving a speech at a pub in New Hampshire, Senator Rand Paul told adoring fans that if he were ever elected president, “the first executive order that I would issue would be to repeal all previous executive orders.”

Taking a dig at executive overreach by President Obama, Paul continued, “Democracy is messy, but you have to build consensus to pass things. But it’s also in some ways good, because a lot of laws take away your freedom. So it should be hard to pass a law. And it, frankly, when you do it the proper way, is. We’ve done way too many things [the wrong way]: Signing statements, altering legislation by the president, are wrong and unconstitutional and shouldn’t happen. Executive orders shouldn’t either.”

Paul has not announced his intention to run for the White House yet but says he will make a decision by next spring. Read more at Breitbart.