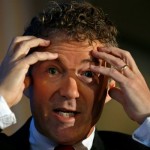 In order to secure a spot in the primetime show, candidates need to average at least 3.5 percent support nationally or 4 percent in Iowa or New Hampshire. Paul’s latest polling reportedly falls short of such criteria. Read more at Bloomberg.