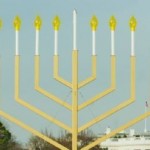 American Friends of Lubavitch in Washington, DC, has launched a major campaign to raise $500,000 to support the National Menorah and other programs in the nation’s capital.

Known throughout the world as the premier celebration of Chanukah, the lighting ceremony of the National Menorah on the Ellipse, just across from the White House, is attended by thousands every year and viewed by tens of millions on national networks and local broadcasts.

Three matchers, the Mayberg Family Foundation, the Falic Family Foundation, and friends who are dedicating their match to the memory of Moishe Dovid ben Mordechai z”l, will correspond and match every donation made during the 24 hour campaign.

The Great Illumination Campaign began at 2:00 pm EST on Sunday. Organizers are aiming to be at the 50% mark by 9:30 EST tonight.

“That would set us on track to reach our goal in time and receive the matches” said Rabbi Levi Shemtov, Executive Vice President of American Friends of Lubavitch (Chabad).

Over 60 million people viewed the National Menorah Lighting Ceremony on the Ellipse via news and other media last year, making it the largest Pirsumei Nissa event in the United States and beyond.

This is in addition to the thousands of Jews from all backgrounds and levels of affiliation that attend and participate in this and other programs of American Friend of Lubavitch (Chabad) in Washington, DC.

“We have a lot of energy in the program, and we are working to keep it going. It keeps growing every year, the response is phenomenal, but it remains completely privately funded, so we need to get this done,” Rabbi Shemtov says.
Join at charidy.com/afl.