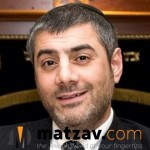 [Video below.] Rabbi Yosef Mizrachi of Monsey, NY, claims in a new video clip that fewer than one million Jews were killed in the Holocaust, not six million, as documented by prominent Holocaust scholars and institutions established to memorialize the six million kedoshim.

He goes on to explain: “If you ask me how I get one million, it’s very simple… First of all, according to the secular Jews and non-Jews, anyone who has a drop of Jewish blood in them is Jewish… There are thousands of people…in the US whose family names are Cohen or Levi and they are completely non-Jewish. There are thousands named Rosenberg, Miller, Mizrachi, Arush, whatever you want they call them, and they are completely not Jewish. There are many Bucharim in Queens who go around with Magen Dovids, and they had a bar mitzvah and wear tefillin, and they occasionally go to shul, and they are absolute goyim.

“That’s how it was in Europe,” he continued. “Eighty percent of the Jewish people were assimilated and intermarried, many generations before the Holocaust. From the time of Herzl, who intended to Christianize the Jews, as he says in his book, The Jewish State, in a letter to the Pope, ‘Give me time and I will convert all the Jews to Catholicism, and this way we will prevent anti-Semitism and they will no longer be a problem. That’s what’s written in his book, Altneuland. You can open it up and check. Herzl planned to convert all Jews to Christianity 120 years beforehand. After that, from then until the Holocaust, there is another 50 years. Every hour, every day, the Jews intermarried with non-Jews.

“Now, since many of them lived like Jews, even though they were not necessarily religious, but they kept Pesach like some do in Israel, celebrating using electricity and cars and trains, they celebrated a little bit… So what happened? Hitler took every one who had even a quarter of Jewish (blood). If your grandfather from your father’s side was Jewish and the rest were non-Jews, [he sent you] to the gas chambers. They also put in the wives of Jews who were entirely non-Jewish. If she hid him or they were hidden by non-Jews, if they were caught, they killed them as well. A lot of Jews were included in the count, but, in truth, how many Jews were actually killed? According to my humble opinion, not even a million, because if you look at the percent of assimilation that there was in Europe, which already reached 80 percent, it is reasonable to say that 80% of the six million were not Jews… 50 million died…[but] we’re taking only about the number of those who claimed to be Jews.”

It should be noted that while  Mizrachi indicates that Herzl lived 120 years before the Holocaust, in truth, Herzl was born in May of 1860 and died in July of 1904. If only that was the only mistake in his presentation…

Rabbi Mizrachi was born in 1968 in Israel and served in the IDF. He later worked in finance in New York City. Mizrachi founded “Kiruv Organization,” an outreach organization, in 1995, and in 1997, he left his professional career to get involved in kiruv.

WATCH A VIDEO OF THE REMARKS