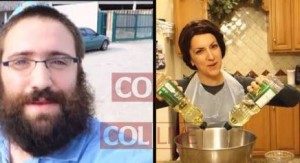 Chabad Rabbi Benny Hershcovich, and his wife, Sonia, who is 9 months pregnant, are alive and, apparently, well, but out of contact in the wake of Hurricane Odile, which hammered Mexico’s Baja California peninsula on Monday, his brother, Zvi, told The Algemeiner.

“As far as I know, my brother’s ok; our mother spoke with another family in Cabo, whose son is with my brother,” he said on Tuesday, noting that he’d just spoken with his mother, from his home in Montreal. Their home is still without electricity, and the two are surviving on only 25 liters of water, according to Chabad Online.

The couple, “described hiding in a closet with their children and [reciting Psalms] as the hurricane hit,” relatives who contacted them said. “They were able to hear people screaming for their lives outside their home.”

There are unconfirmed reports of flooding to the couple’s home, which served as a regional Jewish outreach center, and large quantities of food Sonia prepared for the upcoming Rosh Hashana holiday spoiled due to the power outage.

Hershcovich said that, “it was a real disaster that hit Cabo,” adding that, “The community is shaken.”

He called on anyone with access to the area to lend a hand in overcoming the disaster, noting the upcoming Jewish New Year holiday. There are several hundred local Jewish families, he said, and pointed out that it was a resort town, with many temporary visitors.

Rescue services said they’d treated close to 140 injured by the hurricane, although there were no deaths, so far.

Rabbi Mendel Polichenco of Tijuana, Mexico, a colleague, said that Sonia “went into labor, [but] they gave her something to delay the labor on Sunday.”

The couple have “…no means of communication, no phones, no internet, no electricity, and we know the situation is desperate as to drinking water,” Polichenco said, adding that “What we desperately need is for someone there to call us, so we can assess what he needs.”

“With maximum sustained winds of 125 mph, Odile is the strongest hurricane to make landfall anywhere in Baja California since modern records began in the mid-20th century,” according to weather.com meteorologist Nick Wiltgen.

“This storm is putting the tourist infrastructure of Cabo San Lucas and the Los Cabos region through the harshest conditions it’s ever experienced,” he noted.

“The security situation is tenuous with rampant looting occurring and roads difficult to traverse,” according to the Chabad outreach group, who the couple represent.

Polichenco and Chabad Rabbi Yonah Fradkin of San Diego are putting together a convoy of vehicles to drive the 20 hours down to Cabo and La Paz from the San Diego border, according to Chabad.

“Material such as electrical generators, food supplies, and flood abatement equipment are being sought. Generators and donations of emergency materials located in the Southern California region are much needed,” the group said.