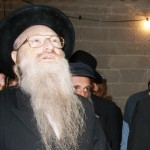 The rabbi who participated in the radical right-wing wedding that caused a firestorm of controversy was recently filmed condemning the Shin Bet and accusing its agents of collaborating with Arabs to murder the Dawabsheh family in Duma – a crime believed to have committed by radical right-wing Jews.

“It is known that all the acts they seek to attribute to Jews were committed by Arabs,” Rabbi Daniel Stavsky declares in the footage obtained by Ynet. “And the agent provocateurs in the Shin Bet’s anti-Jewish department did it to frame them.”

Rabbi Stavsky is associated with the extremist “hilltop youth” and an influential figure in their movement. As of publication, it was not clear whether the rabbi stayed after the wedding ceremony to witness the dancing and displays of hatred.

“In the dark basements of the Shin Bet’s department, severe, cruel torture is inflicted against innocents, as well as…harassment and cruel crimes against humanity,” the rabbi asserts in the clip.

Rabbi Stavsky announces in the video that when it is ultimately discovered that Arabs were involved, the Shin Bet’s Jewish errorism department will surely be disappointed. “A military-dictatorial regime that is against the Jewish residents has for years been ruling Israeli territory liberated from the Arab occupier in Judea and Samaria,” Rabbi Stavsky says in the video.

In contrast, about 50 rabbis from the Religious Zionist movement issued a special statement condemning price tag attacks and expressing support for the Shin Bet.

“We denounce and find detestable all expressions of hate and violence like ‘price tags’ directed at Arabs,” read the statement. “These actions are in complete contradiction with the Torah of Israel and Jewish morality. We support the Shin Bet and all security forces.” Read more at YNET NEWS.