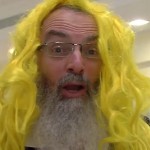 Rav David Stav, chairman of the Tzohar rabbinical organization and chief rabbi of Shoham, angered many people last week by appearing in a humorous Purim video wearing a blonde wig.

The clip, which is more than four minutes long, also shows women without a head cover. In one of the segments, Rabbi Stav is seen standing inside a house of study with the blonde wig on his head and an open sefer.

“It’s unthinkable that the rabbi would dishonor the Holy Scriptures within a house of study,” said a source in the charedi sector.

The video, which was posted on YouTube, drew dozens of angry comments. “Rabbi Ovadia ruled that a man must not dress up as a woman, but Rabbi Stav doesn’t care about that,” one person wrote.

Stav’s associates said in response that the rabbi had tried to come up with a unique way to introduce his shul to the community members and the rest of Shoham’s residents, and maybe even get them to join it.

They explained that moderate high school yeshivos had a years-long tradition in which the yeshiva rabbis dress up during the month of Adar. The activities throughout the month include special lessons in which the students and educational reverse roles, and sports competitions between the teachers and students.

In the video, Rabbi Stav dresses up as other figures as well, including a charedi, a moderate religious Jew and a secular in the shul, in a bid to present his community to the viewers and imply that his religious way respects all parts of society.

Rabbi Stav ran in 2013 for the position of Israel’s Ashkenazi chief rabbi.

Leave a Reply to Torah is beautiful Cancel reply