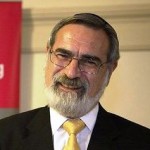 Rabbi Lord Jonathan Sacks, the recently retired Chief Rabbi of the United Hebrew Congregations of the Commonwealth in the United Kingdom, gave the “State of the Jewish World Address” at the American Jewish Committee’s Global Forum on Tuesday, identifying three major threats to the Jewish people: the growth of anti-Semitism, the campaign to delegitimize Israel, and Iran.

The effort to deny the right of Israel to exist has become a new kind of anti-Semitism, targeting the Jewish state instead of the Jewish religion or race, said Sacks. Iran remains a threat because of its support of terrorist groups, its controversial nuclear program, and its open hostility toward Israel, he said.

“The victim cannot stop the crime by himself,” Sacks said, adding that Jews are not the only victims of extremist Islamist terrorist groups-in the Middle East, the Christian population has declined from 20 percent to 4 percent of the region’s total inhabitants.

Sacks also emphasized the need for Jewish unity, asking, “How can we expect the world to love us if we can’t love one another?” Though all Jews “do not share the same faith, we all share the same fate,” he added.