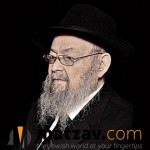 Rabbi Refoel Wilschanski, an elder Lubavitcher Chossid who served the communities of France and North Africa for over 50 years, passed away on Wednesday. He was 91.

Rabbi Wilschanski was known was a noted mashpia and role model to many.

The son of R’ Betzalel Wilschanski, R’ Refoel learned in various Tomchei Temimim yeshivos while running from the Communists. While learning in Berdichev, he was arrested along with the other yeshiva bochurim and put into prison.

He was among a group of choshuve bochurim who learned in yeshiva in Kutayis, Georgia, where he became very close to the Rosh Yeshiva, Rabbi Shmuel Notick.

After WWII, he traveled to Samarkand, where he was a student of R’ Nissen Nemenov.

He left Russia in 5707 and was appointed as the director of the Lishka – Central Office of Chabad Institutions of France and North Africa.

He moved to New York in the 1970s, where he became a pillar of the community.

The levaya will take place tomorrow at Shomrei Hadas Chpaels in Boro Park at 1 p.m.