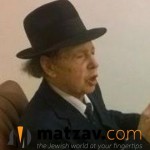 It is with great sadness that we report the passing today of Rabbi Mordechai Elozor Herbst zt”l, educator and community activist from Buenos Aires, Argentina.

Born in Radzyn, Poland, he immigrated to Argentina with his parents just before WWII.

Rabbi Herbst worked in the field of education for many years and was a community activist in Buenos Aires, Argentina. He later became the rabbi of Gran Templo Paso, the city’s historic shul.

He was well known for his lectures and writings, which contributed greatly to the Judaism in the country, and inspired many, bringing them closer to Judaism, saving many from intermarriage.

He merited to have children and grandchildren who are following in the path of Torah in all walks of life.