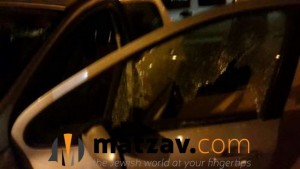 An Israeli driver was targeted in a shooting attack on Thursday evening. Rabbi Itay Halevi was driving out of the town of Psagot, near Yerushalayim, when he came under automatic fire by unknown assailants. He was unharmed in the terror incident, while the suspected terrorists fled the scene, prompting a manhunt by IDF soldiers in the region for suspects.

It was around 8 p.m. when the Palestinian terrorist opened fire on the car.

“I was leaving Psagot to go back home to Migron. Right outside Psagot there’s a sharp bend in the road, and immediately after the bend, they opened fire on my car from the right side,” Halevi told Tazpit Press Service. He suspected more terrorists were laying in ambush close by.

He fled to a nearby gas station, waiting for soldiers to arrive. “More then 10 bullets actually penetrated my car, passing between me and the front windshield, meaning the bullets entered the car from the right window, and some exited from the left side, close to the driver’s seat. But I left without even a scratch,” Halevi told TPS.

“It ended in a miracle. I sped out of the danger zone as fast as I could while calling the security services on my phone even before stopping,” he added. “I am thankful to God for this miracle, and I am thankful to the IDF and Police for doing their job.”

IDF and police forces are searching for the terrorist.