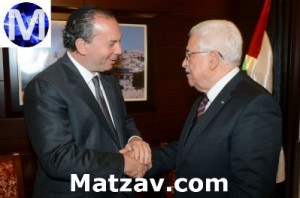 At the meeting, Rabbi Schneier urged the PA President to be more vocal in his support for expanding global relations between the Muslim and Jewish communities. In particular, Abbas said that he agreed to join with the FFEU in speaking out for the European Jewish community in combating bans on bris milah and shechitah.

In response to Rabbi Schneier’s request, Abbas also announced that this year he will publicly speak out on behalf of Holocaust remembrance efforts around the world. He described the Holocaust in the meeting as “The single greatest tragedy in modern-day history” and said that remembrance should be an issue of increased concern to both Jews and Muslims.

Unfortunately, Abbas’ past actions and the activities and rhetoric prevalent in the PA communities stand in stark contrast to the platitudes he offered to Rabbi Schneier.