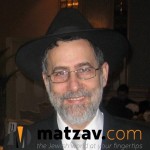 Rabbi Menachem Genack, CEO of the Orthodox Union’s kosher division and rov of Congregation Shomrei Emunah in Englewood, N.J., has announced that he will back Hillary Clinton in the upcoming presidential election.

In an op-ed published in the Jewish Week, Rabbi Genack wrote that as we take note of all the dangers that surround us, “we realize how important it is for the next president to embrace American exceptionalism with pride. Hillary Clinton is the candidate who will best express the grandeur and bear the responsibility of American exceptionalism.”

Genack explains that he is an advocate for her based on his personal experience, as he has known Hillary personally for years. In 1994, Rabbi Genack was invited to accompany the Clintons to witness the signing of the peace treaty between Israel and Jordan.

“I came to realize that she has an extraordinary intellect, an open mind, a clear vision for the United States, and a deeply rooted friendship with Israel and the American Jewish community,” Rabbi Genack claims.

With the threat from radical Islam and the risks posed by a resurgent Iran, Rabbi Genack says, the United States “needs a foreign policy that will use all of the tools in our power to address these threats. With Hillary Clinton as president, I believe America will be engaged in the world — and to great effect. She can and will be the leader who will apply deep strategic thinking to deal with the foreign policy issues confronting us. She will put America at the forefront of world leadership.”

He says the US needs a president “who will mobilize American power, strategy and policy to ensure that the Iran nuclear deal does not simply become a cover for Iran’s pursuit of nuclear arms. As president, Clinton will take the necessary action to protect against these risks.”

From the Senate floor to the Situation Room, says Genack, “Clinton has proven to be a true friend of Israel. She has spent decades developing and nurturing relationships with Israeli leaders that would continue if she becomes president.”

Rabbi Genack shares a personal incident about Hillary Clinton that, he says, demonstrates her extraordinary qualities: “Some years ago, when I introduced a friend of mine, Jamie Fox, New Jersey’s former commissioner of transportation, to then-Sen. Clinton, she said to him, ‘I recently saw your name quoted in an op-ed piece about port security by [Republican Sen.] Lindsey Graham.’ I was stunned by her capacity to absorb information, to recall it and put it to use. The incident also brought home her ability to build working relationships. Sen. Graham was one of the managers of the trial to impeach former President Clinton. And yet, Hillary Clinton subsequently worked with the senator on pressing issues, including port security.”

Rabbi Genack says Hillary is “a woman whose life and mind are truly exceptional; she will personify American exceptionalism. There is no one I trust more, and no one better suited than she to keep a level head, protect Israel’s best interests, and lead our country through these trying times.”

Interestingly, Rabbi Genack’s op-ed makes no mention of his book, Letters to President Clinton, which is a collection of 15 years of correspondence  between Rabbi Genack and former President Bill Clinton. The two first met when Clinton was beginning his road to the White House. As their friendship deepened, Genack started sending Clinton brief essays highlighting spiritual insights from the Torah to help him navigate difficult decisions and issues. During his second term, the president asked Rabbi Genack to write the pieces more regularly and formally, and the rabbi invited acquaintances to contribute. The book  features a foreword by Bill Clinton.