Dr. Lander was the recipient of the landmark teshuvah from Rav Moshe Feinstein zt”l concerning the Torah position on Christian-Jewish dialogue in a 1967 letter published in Shailos Uteshuvos Igros Moshe.

Dr. Lander, a social scientist and educator, was one of three associate directors of the Mayor’s Committee on Unity, established in 1944 by former New York City Mayor Fiorello La Guardia, which became the city’s first Commission on Human Rights. The Commission prepared the first civil rights legislation for New York state.

Dr. Lander built Touro College from scratch into a multi-million dollar institution with an international presence. Before establishing Touro College in 1971, he served as a professor of sociology for over two decades at City University of New York and at Yeshiva University, where he established the university’s graduate schools of education, psychology and social work and served as dean of its Bernard Revel Graduate School.

Dr. Lander served as a consultant to three United States Presidents and was part of the seven-member commission that established the historic “War on Poverty” program in the U.S. He served as a consultant to the White House Conference on Children and Youth; on an advisory council on public assistance established by Congress; and was a member of the President’s Advisory Committee on Juvenile Delinquency and Youth Crime under the Johnson and Kennedy administrations.

For eight years he served as a senior director of a national study for the University of Notre Dame of South Bend, Indiana on the problems of youth. He was the author of “Towards an Understanding of Juvenile Delinquency,” published by Columbia University Press, and numerous articles in the field of sociology. He also served as a consultant to the Maryland State Commission on Juvenile Delinquency. 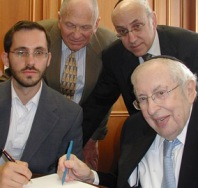 Dr. Lander was honored by the Council of New York State College Presidents for his lifetime contributions to higher education.

The levaya will take place tomorrow at 11 a.m. at Yeshiva Ohr Hachaim in Queens.