It is with great sadness that we report the passing of Rabbi Chaim Yosef Kalter z”l, a remarkable yungerman who was just 32 years old.

Reb Chaim Yosef was a son of Rabbi and Mrs. Naftali and Rus Kalter of Boca Raton, Florida. Rabbi Naftali Kalter is the headmaster at Torah Academy of Boca Raton.

Reb Chaim Yosef was a beloved member of the Las Vegas Kollel and was recently transferred to the New York area for medical treatments. 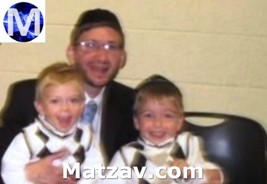 During his illness, Reb Chaim Yosef’s good spirits despite his challenging situation were inspiring. He would say, “Hashem put the cancer in me and can just as easily take it away.” The Ribono Shel Olam took back his pure neshamah yesterday.

The strength of Reb Chaim Yosef and his wife Bracha inspired so many people and remain an inspiration to one and all. May the Torah and chessed performed for a refuah shleimah for Reb Chaim Yosef serve as zechuyos for his neshamah.

Reb Chaim Yosef is survived by his parents; his wife, Bracha, and their three children. He will be sorely missed by his family, friends and all who merited to come in contact with him.

Click below to watch a moving video of Reb Yosef Chaim thanking all those who learned or performed mitzvos in his zechus or provided financial and emotional support: