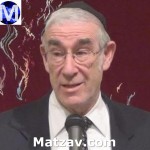 In an essay posted yesterday on TorahWeb.org titled “Oh, How the Mighty Have Fallen,” Rabbi Benjamin Yudin, longtime rov of Congregation Shomrei Torah in Fair Lawn, New Jersey and rebbi at Yeshiva University, decried the Supreme Court of the United States ruling which legalized non-traditional marriage.

Rabbi Yudin’s title hints at the decline of America and in his essay he more explicitly describes its nose-dive, saying, “It is amazing how history repeats itself – historians attribute the downfall of both Greece and Rome to their acceptance of ….immorality. The Medrash (Beraishis Rabbah 26:5) teaches that the final straw that sealed the fate of the generation of the flood was their writing a marriage contract for men to marry each other and for humans to marry animals.”

In a further reference to the social and moral upheaval that has swept through American society in recent decades, Rabbi Yudin draws a parallel between the toeivah symbol of a rainbow colored flag and the punitive flood unleashed in the time of Noach by noting, “Is it not ironic that the rainbow flag has come to symbolize [toeivah] pride and rights! Unbeknownst to the designer creating a flag in 1978, our holy Torah has taught us (Bereishis 9:15) that the rainbow is a symbol of G-d’s anger towards man being held in check by His oath not to destroy the world again after the flood; the rainbow serves as a clear indicator that man has angered his creator.”

In his closing paragraph, Rabbi Yudin charges Jews with the mission of raising our society out of its moral morass, saying, “Even as tumah-impurity spreads its ugly negativity in the rest of society, taharah-sanctity, purity and holiness can uplift and enhance society…we must be the holy element which uplifts the entire society. Our response must be greater adherence to and appreciation for the laws and privileged lifestyle of kedushah…”