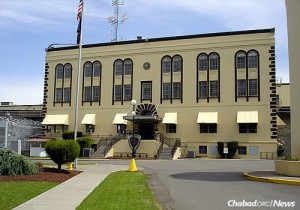 With his bright-orange beard and black-velvet yarmulka, Rabbi Avrohom YitzchokPerlstein, 33, is immediately recognizable among the staff and inmates at the Oregon State Penitentiary in the state capital of Salem, where has served as a chaplain since 2013 and as a volunteer since 2008.

The maximum-security prison houses as many as 2,500 inmates, including 34 on death row. Perlstein, co-director of the Chabad Jewish Center of Salem, Ore., describes some of his work both inside and outside the facility, and how Oregon works hard to affect change in those behind bars.

Q: How did you originally get involved in prison chaplaincy, and what are your duties?

A: I began volunteering here as part of a release program that helped people along their way out of prison as they struggle to find their place in free society. When a chaplaincy position opened up here, people who had gotten to know me as a volunteer suggested that I apply. I joined two fellow chaplains, one of whom is Buddhist and the other Christian.

Q: What does a typical day of a prison chaplain look like?

A: For the most part, I spend a lot of time talking to people one-on-one. Since I am Jewish—and most of them are not—I don’t conjure up any negative associations some people may have with their personal experiences with organized religion. As a Chabad rabbi, I try to help them incorporate the principles of the Seven Noahide Laws into their lives. 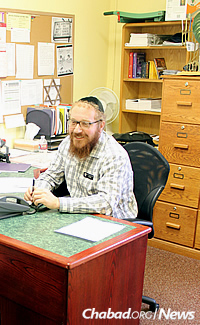 A lot of what I try to impart is the Lubavitcher Rebbe’s view of the world as a garden full of potential that we can make flourish with our actions. I try to help them stop living with guilt and allow themselves to live life in a positive way.

Of course, I also cater to their religious needs, including those in “special housing”: on death row and in mental-health facilities.

On death row, people have been waiting to die for over 20 years. They face death every day, and they need a human touch, someone to reach out to them as one human to another. In mental-health units, religion is often a difficult topic since it becomes maximized in the context of their illness. So I generally leave it alone and simply try to bring comfort to the human behind the glass.

Q: Do you always communicate through glass?

A: In special housing, yes, through glass or bars.

Q: Have you ever been afraid in the course of your work there?

A: No one has ever threatened me. The bottom line is that many people here may have done something very wrong, but they are not essentially bad individuals. The way you treat them is how they treat you. If you walk around with a chip on your shoulder, that will be a problem. But when you show that you care, staff and adults in custody realize you are there to help. Who would want to start up with a chaplain who cares to help them? Obviously, I’m cognizant of the environment I’m in and don’t have my head in the sand, but this has been my experience. 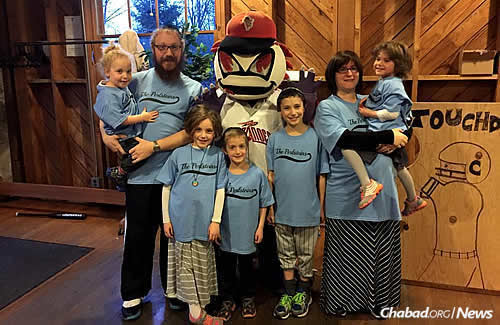 Q: What kind of training did you receive to prepare for this kind of work?

A: There is the standard training every employee has here to become familiar with the universe of the Department of Corrections. But, believe it or not, the best training I got was my time in yeshivah. The ideals we learn in Chassidismabout personal responsibly to make the world a better place and the understanding that each person is a part of G-d are the ideals that I try to share. I simply try to take what I was given—caring teachers and a deep sense of community—and bring it here.

Q: I’ve heard that Oregon is a leader in how the prison system is run. In your opinion, how so?

A: Oregon has one of the lowest recidivism rates in the nation, approximately 28 percent. This is largely attributed to a multipronged effort to help people in the penal system gain accountability, dignity and skills that they can take with them when they leave.

As soon as they come in, they spend several weeks at intake, where they are tested to determine where they are socially, emotionally and educationally. A program is then tailored for each person to maximize his or her potential. Some people will be sent get a GED [General Educational Development], while others will go for an associate’s degree. One inmate might require help learning parenting or communication skills, while another might need help battling an addiction.

From the second they walk in, the system is focused on helping them walk out with something better.

On a cultural level, there is a movement to help them re-establish their personal dignity. For example, we don’t refer to the people here as “inmates” or “prisoners,” but as “adults in custody.” This helps them develop and maintain their dignity and stature as individuals with intrinsic self-worth. 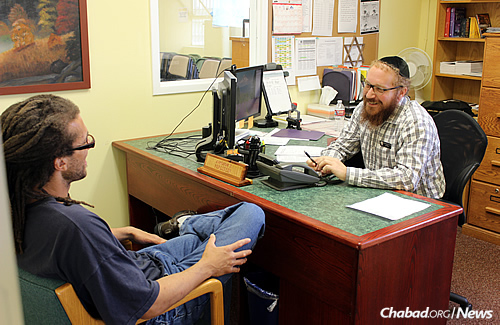 Q: Prisons are often called breeding grounds for radical Islamic groups. Have you found that to be true?

A: Here in Oregon, I do not think that is the case. In fact, Muslims get a bad rap because people are so scared of them. The Muslim chaplains whom I know both here and in other states work very hard to counter hatred. They are very outspoken in their opposition to radicalism, and their voices are heard. Our main Islamic volunteer here is a very loving person who decries violence of any kind.

Q: Do you keep in touch with people once they are on the outside?

A: The Jewish ones, yes. In general, we try to connect people on their way out with community stakeholders who can help them acclimate to the outside world. For the Jewish people, I am that stakeholder, and there are a number of individuals I still keep in contact with, both in the state and beyond.

Q: How does this jibe with your work as co-director of Chabad of Salem?

A: The truth is that Chabad has benefited from it. We are a small community with very limited resources. Having a steady source of income for our family has allowed my wife and co-director, Fruma Ita, and me to concentrate our efforts and funding on programming without having to worry about the mortgage—a huge blessing in our lives and a boon for Chabad here.

It’s a challenge to find time for everything, and programming took a hit in the beginning, but it has allowed us to leap forward. I just work different hours. For example, yesterday I was in prison all day, came home to have dinner with a state senator who is Jewish and then went to a shivah house of mourning, where I had arranged prayer services with a minyan [the quorum of 10 Jewish men needed for public prayer].

I see my work here in prison as an extension of my mission as a Chabad rabbi. I’m really doing the same thing I do on the outside, sharing Torah and Judaism with others.

Sure, I’m busy, but I’m busy making the world a kinder, more G-dly place for all of His children.