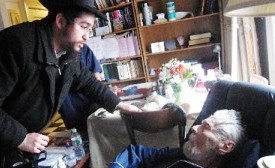 [Photo Credit: Beth Sarafraz] A rabbi who learned that the oldest man in America, Alexander Imich, 111, was a Jew living alone in New York City, set out to

meet him and offer his religious assistance.

Rabbi Pinny Marozov, who runs the Chabad of Coney Island, Brooklyn, with his wife, Chaya, heard about Imich while visiting friends over a Shabbos meal in Seattle, Washington. When he returned to New York, he set out to look for him.

But the elderly resident of the Manhattan’s Upper West Side, where he’s lived since 1965, was actually in the hospital, recovering from a fall.

There, Marozov helped Imich put on tefillin probably the first time since his bar mitzvah nearly a hundred years ago in Czestochowa, Poland.

When Imich was discharged and returned home, Marozov visited him there, too. The rabbi helped him put on tefillin again and also hung a mezuzah on the doorway of his apartment.

“He was very happy to see me,” Marozov said, adding that Imich was alert, and now able to walk on his own. “It didn’t seem like a rabbi had ever visited him in his home or made any contact before. I know it meant a lot to him,” the rabbi said.

“It was beautiful when he recited the Shema prayer, which he knew by heart,” said Marozov. “It brought up a spark from deep inside him.”

On his next visit, Marozov invited a reporter from The Jewish Press, which published a story that moved readers to help him. Two days after the profile was published, Imich had replacement hearing aids, home attendants to support his recovery and many new visitors.

Marozov, originally from Montreal, said he plans to visit Imich again before Pesach and bring him some shmura matzah.

Reflecting on his time with his new friend, the rabbi said: “It’s very special for me to have this opportunity.”

Born in Poland in 1903, Imich earned a PhD in chemistry there in 1927. He survived the Holocaust, spending two years in a Russian labor camp near the White Sea. After the war, he emigrated to the U.S. with his wife, Wela, who passed away in 1986.

Imich spent his career as a chemist, ultimately trying to prove to other scientists that the neshama, the soul, survives physical death. In 1995, at the age of 92, he edited and published a book called ‘Incredible Tales of the Paranormal’ about that thesis.

By then, he had outlived all of his peers. He had no children, and most of his family had perished in Nazi concentration camps.

In a speech he gave at age 99, Imich said: “In my life, I have witnessed the development of flight, the automobile, electrification of nations, the telephone, the radio and television, atomic energy, the wonders of bio-scientific medicine, computer technology, great advances in our knowledge of the cosmos, men walking on the moon-the list could go on and on.”