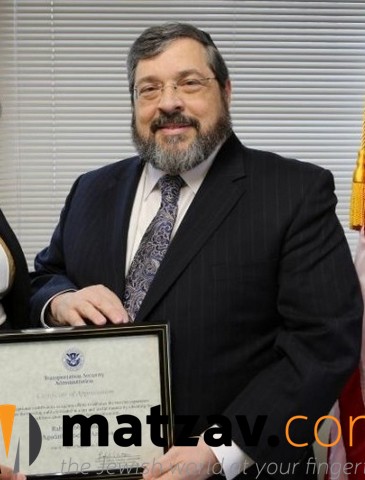 TSA’s assistant administrator for civil rights and liberties, Kimberly Walton, gave Rabbi Cohen a certificate of recognition for helping to “enhance the traveler experience and ensure the traveling public is treated in a fair and lawful manner by educating the workforce about assisting the Jewish community.”

No one can deny that the Transportation Security Administration (TSA) has a difficult job. The agency, a division of the U.S. Department of Homeland Security, is tasked with guarding against the threat of terror in the skies while respecting the civil rights of close to 2 million passengers each day. Balancing these responsibilities has become a major focus of TSA’s work and among its greatest challenges.

Toward this end, TSA has, among other things, reached out to various faith-based groups to better understand the types of problems unique to those communities that might arise at the nation’s airports. Within the Jewish community, Agudath Israel of America’s Washington Office has played a leading role in working with the TSA to advise and educate the agency and its security personnel as to Jewish beliefs, practices, holiday observances, and ritual items. This has helped alleviate potential problems — and avoid unfortunate mishaps and misunderstandings — involving Jewish travelers.

Acting as an unofficial consultant, Agudath Israel’s Washington Office has worked closely and cooperatively with the agency on numerous issues, including efforts to end explicit x-ray imaging of passengers, curb unnecessary or intrusive pat-downs, provide private rooms for searches, and issue notices, web-postings and field briefings during Jewish holiday travel seasons These holiday communications alert both TSA and the traveling public as to what is allowed and not allowed, and what each may expect, at security checkpoints.

“We are both pleased and honored to be called upon by TSA to advise and educate,” observed Rabbi Cohen. “Security is of utmost concern to the Jewish community and we have worked diligently to develop ‘reasonable accommodations’ that satisfy both government safety regulations and Jewish religious requirements.”

The most recent Agudath Israel contribution to this effort is a webinar that Rabbi Cohen conducted covering what TSA referred to as “Judaism 101.” It includes a power point presentation, beautifully produced by Rabbi Ariel Sadwin, Agudath Israel’s Maryland/Mid-Atlantic director, on general Jewish concepts and observances. Its particular focus is on acquainting TSA personnel around the country with the Jewish calendar, as well as with the ritual practices and items that TSA personnel should be aware of at security checkpoints, airports, and other places.

There is a thorough discussion of both year-round issues (e.g., tefillin, religious garb, modesty requirements) and holiday-related issues (e.g. arba minim and Pesach/matzoh requirements). Most importantly, the Agudath Israel presentation — which TSA plans to show several times a year to security personnel nationwide — provides “best practices” suggestions as to how these items should be handled and how to effectively address problems should they arise.

“Years ago, we would regularly receive calls from members of the community who were distraught over unfortunate incidents,” Rabbi Cohen asserted, “The result of greater education has been greater sensitivity on both sides and a dramatic drop in airport mishaps – ultimately resulting in an appreciative TSA and observant Jewish community.”