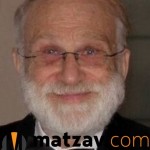 [Video below.] On Erev Shabbos, Parshas Noach, Moshe Duvid (George) Davidsohn z”l was niftar at the age of 79 after his suffered a stroke several years ago.

Moshe Duvid (George) Davidsohn was born in Montevideo to a Jewish family originating from Transylvania; when he was ten, the family moved to New York City where his father worked as a diplomatic consul.

At 14, Davidsohn started his career on Wall Street as an IBM punched-card clerk, while attending high school at night. He attended Brooklyn College and the New York Institute of Finance.

He started his professional career on Wall Street at Dean Witter. Later on, he founded his own company Davidsohn Computer Services.

For many decades, as his company was thriving, Mr. Davidsohn was known as a baal tzdakah, contributing to many diverse causes. He was respected in many different communities, most notable Chabad. Mr. Davidsohn was a mispallel in the Bais Medrash of the Liska Rebbe in Boro Park for many years. The Liska Rebbe delivered a hesped at the levaya, pointing out Mr. Davidsohn’s commitment to hiring heimishe yingeleit when it wasn’t fashionable.

VIDEO OF THE LEVAYAH: