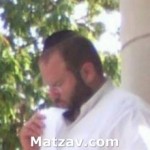 It is with great sadness that we report the passing of R’ Chaim Rosenberg z”l.

Chaim was a beloved longtime talmid of Beth Medrash Govoha in Lakewood. He was just 36 years old at the time of his passing.

R’ Chaim hailed from Bergenfield, NJ, and learned at Mevaseret, Bais, YU and then Yeshivas Mir-Yerushalayim before joining Beth Medrash Govoah. A true mentch and baal middos, he had numerous friends from all walks of life and endeared himself to all.

One friend said after learning of his passing, “Who didn’t love Chaim? How could you not love him? He was so pure, so genuine, so kind. We are all in shock.”

R’ Chaim was a picture of simchas hachaim, always smiling and ready to share a good word with one and all. His love for other people was always apparent, and his steady presence at Beth Medrash Govoha for so many years was a testament to his ahavas haTorah and his constant aliyah.

A chavrusah of his told Matzav.com that he was always impressed by R’ Chaim’s diligence in learning, his ehrlichkeit, his pure values and strong hashkafos, and his meticulousness in keeping to his sedorim. He excelled in the middah of vatranus and was extremely careful in his shemiras halashon and other areas of personal conduct.

R’ Chaim had a huge heart and was always ready to do a favor for anyone at anytime. He thought of others and worried about their plight. His own situation was always secondary in his eyes.

R’ Chaim had a great sense of humor and was able to bring joy and happiness in almost any environment.

Although he spent many years in the parsha of shidduchim, R’ Chaim maintained strong emunah and bitachon, always believing that his yeshuah would come. Unfortunately, he never did marry, but his strength and composure under his circumstances serve as a source of inspiration to many.

R’ Chaim had been feeling fine this week and attended a wedding just two days ago. Today, however, he felt unwell and Hatzolah was contacted. He was taken from the Beth Medrash Govoha campus on Sixth Street to Monmouth Medical Center’s Southern Campus (formerly Kimball). He then suffered cardiac arrest and passed away a while later.

R’ Chaim’s sudden passing has plunged the talmidim of Beth Medrash Govoha and the surrounding community into mourning.

The levayah will take place at 8:45 Sunday morning at the Bendheim (Yoshon) Bais Medrash of Beth Medrash Govoha on Seventh Street, between Private Way and Lakewood Avenue, in Lakewood, NJ, followed by kevurah in Paramus, NJ.