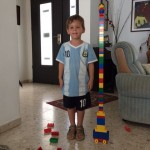 Pressure is mounting on social media for soccer superstar Leo Messi to publicly condemn the death of a four-year-old Israeli child who was a fan of Messi’s before he was killed by Hamas rocket fire on Friday.

Messi, who plays for a soccer team funded by the Qatari government, which also serves as Hamas’ chief financier, has come under increasing pressure to condemn the death of Daniel Tregerman just two weeks after the soccer player expressed remorse over the death of Palestinian children.

Israelis on social media are now launching a campaign to pressure Messi into condemning Hamas’ ongoing attacks on Israeli citizens.

“Hey Leo Messi, take a look at that boy, Daniel Tregerman, wearing the national jersey of the best player in the world,” Liran Cohen, an Israeli citizen, wrote in a Facebook post that tagged Messi, according to Israel Hayom.

The mayor of the Israeli town Raanana also urged Messi to condemn Tregerman’s death, according to Israel Hayom.

“A personal word to Leo Messi: Daniel looked up to You and saw in You more than a football star,” Israel Hayom quoted Mayor Zeev Bielski as writing. “For your information, the Qatars [sic] who finance your football club, are also sponsors of the hamas [sic] who launched the missile that killed your 4 years [sic] old fan, Daniel.”

Tragerman’s mother Gila also noted that her son was a huge fan of Messi’s while recounting the details of Hamas’ rocket attack.

“The children were playing in a tent inside the house, and from the moment of the siren to the explosion only three seconds passed,” Gila Tregerman was quoted as saying by Israel’s Foreign Ministry. “We didn’t have time to get the children and go into the protected room.”

“Daniel was very responsible about the warnings and the sirens, and whenever there was an alert he knew just what to do,” she said. “Once everyone was inside the safe room he would say, ‘Now we’re all safe.’ This time he had only three seconds from the siren to the explosion, and didn’t make it. Daniel was a soccer fan and sported a Lionel Messi shirt.”

While Messi has remained silent about his Israeli fan’s death, he posted several weeks ago on Facebook about how saddened he is by the death of Palestinians.

“As a father and a UNICEF Goodwill Ambassador, I am terribly saddened by the images coming from the conflict between Israel and Palestine, where violence has already claimed so many young lives and to injure countless children,” Messi reportedly wrote in a Facebook post that featured the image of an injured Palestinian child.

Messi’s Barcelona football team is funded by the Qatari government, which has come under criticism for serving as Hamas’ top financier and enabling its terror campaign against Israel.