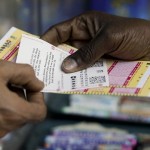 Someone’s going to be dancing the hora.

After Wednesday’s $500 million-plus Powerball prize went unwon, the next chance for the almost-nationwide jackpot moves to Motzoei Shabbos. At least $700 million, an all-time U.S. record, is expected to be handed over should the balls fall in the right way.

With that in mind, here are a lucky 10 questions about Powerball:

How does this prize stack up against previous winning amounts?
If the jackpot reaches $700 million — which lottery officials were predicting Thursday morning — it will be the biggest-ever lottery prize in U.S. history. The previous record was a $656 million Mega Millions payout in 2012 handed over to three lucky winners in Kansas, Illinois and Maryland. That $700 million figure is for an annuity paid out over 30 years. If you want your money immediately, which most winners do, you will get an estimated $428.4 million. Still nothing to sniff at.

And, if more folks than expected buy into the frenzy — which could happen given the record-setting prize — the pot could be even higher.

What are the odds of winning?

According to Multi-State Lottery Association, which runs the game, the odds of having the winning Powerball ticket are 1 in 292.2 million. In other words, you might as well wave goodbye to the $2 you hand over for each ticket. Of course, as the New York Lottery says, you must be in it to win it.

What states participate in Powerball?
The shortest way to answer this is to say what states are NOT in Powerball. Forty-four states (plus Washington, D.C., Puerto Rico and the U.S. Virgin Islands) participate in the game. The ones that do not are Nevada, Utah, Mississippi, Alabama, Alaska and Hawaii.

Do you have to live in one of the participating states to win?

No. You can even be a tourist from Toronto. Or Timbuktu. According to the Multi-State Lottery Association, there is sometimes talk of limiting wins to U.S. citizens, but no laws have been passed so far.

How does your $700 million win measure up?

Well, it’s more than the gross domestic product of at least 9 nations. According to 2014 figures from the World Bank, that means you would have more money – before taxes (and maybe after) than:

How much tax you will you have to pay?

That depends on where you live. The federal government will get its cut in all cases (and automatically creams off 25% before you even file your tax return). Needless to say, you will be taxed at the highest rate. If you are lucky enough to live in a state without income taxes, there’s nothing more to pay. For the rest, it depends on your local income tax rate.

Where and when is the draw done?
Tallahassee, Fla., though sometimes, according the Powerball folks, the lottery drawings go on the road and are done at special events around the nation. Drawings are at 10:59 p.m. ET on Wednesdays and Saturdays.

Who’s watching to make sure there aren’t any shenanigans?

It could be you. The numbers are drawn in the presence of Multi-State Lottery officials, an independent auditor, a security official and — here’s where you come in — members of the public. According to the Powerball people, the draw equipment — that plastic-tube thing — is kept in a double-locked alarmed vault and the balls sets are sealed by the auditors. Meanwhile, all events are audio- and video-recorded when the vault is opened. The equipment, lottery officials assure us, is tested regularly (measurements, X-ray and statistical tests for non-random behavior). You can also watch it: Powerball draws can be seen on hundreds of TV stations nationwide and the draws can be seen on YouTube and the Powerball website.

What if no one wins on Motzoei Shabbos?
The can again gets kicked down the road. If no ticket – or tickets – match the numbers spit out by the lottery’s machine, there will be another draw next Wednesday. And an even bigger prize.