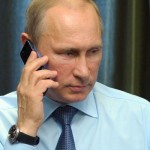 Russian premiere Vladimir Putin is urging the international community to consider potentially granting “statehood” to eastern Ukraine, according to Russian media reports. He said talks of creating a separate state are needed to make sure that the interests of locals “are definitely upheld.” His less than subtle push for an east Ukraine state comes following a week of allegations and evidence that Russian troops illegally entered the Ukraine.

The EU has threatened that Putin must reverse its military aggression or face further sanctions. Russia has denied accusations of intervening in Ukraine and, instead, criticized the EU for “backing a coup d’etat” in Ukraine. Read more at the BBC.