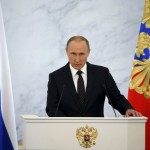 In a state-of-the-nation speech Thursday, Vladimir Putin warned that Turkey would “regret” shooting down a Russian war plane on the Syrian border.

“We’ll remind them again what they did,” Putin said of Turkey in a speech to parliament on live Russian television. “They will regret it.”

The Russian president continued to critcize Turkey, accusing Ankara of buying oil from ISIS and calling the downing of a Russian plane a “treacherous war crime.”

Turkey maintains it shot down the plane after the jet violated its airspace for 17 seconds after receiving repeated warnings, while Russia argues it never crossed over from Syria’s airspace. Read more at BBC News.