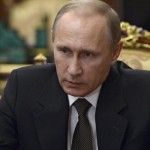 Turkish F-16 fighter jets shot a Russian SU-24 warplane out of the sky Tuesday after it ignored warnings for violating the country’s airspace near the Syrian border, a Turkish military official told Reuters.

The plane reportedly crashed in the area known by Turks as “Turkmen Mountain” in northern Syria near the border. At least one of the two pilots was reportedly killed. Russian President Vladimir Putin called the incident a “stab in the back by the accomplices of terrorists.”

A U.S. official said that Turkey had not warned the coalition that it was about to take down a plane. “They just did it,” the official said. “We need to make sure this doesn’t become something worse.” Turkey says its pilots warned the Russian aircraft 10 times before striking it. Read more.