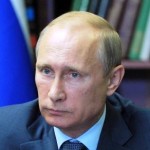 So much for subtlety. Russia President Vladimir Putin apparently told the president of the European Commission that he could capture Kiev in two weeks, if he so desired.

On a private phone call, Jose Manuel Barroso asked Putin if troops had entered eastern Ukraine. “That is not the question,” he apparently replied. “If I want, I will take Kiev in two weeks.” The Kremlin did not deny the remark, but did denounce its leak, saying it had an audio recording and the words were “taken out of context.”

Russian tanks and troops crossed the Ukrainian border last week, and warned of challenging its global might, even going so far as to threaten at nuclear war. Read more at The New York Times.