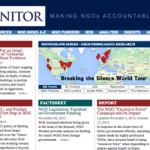 The push for the European Union to label all Israeli products made in Judea and Samaria is part of a larger economic war by NGOs against the Jewish state, the Jerusalem-based research institute NGO Monitor said Tuesday.

“The European Union’s decision to label Israeli-made products from beyond the Green Line is another act in the ongoing NGO campaign to delegitimize Israel,” said Prof. Gerald Steinberg, the head of NGO Monitor. “This strategy is also the driving force of BDS (Boycott, Divestment and Sanctions) campaigns, and it is led by EU-funded NGOs that are detrimental to a peaceful, negotiated solution.”

Labeling is only one warfare tactic in the anti-Israel camp. The “Trading Away Peace: How Europe Helps Sustain Illegal Israeli Settlements” of 2012, authored by 22 NGOs, stated that the NGOs’ goal is to begin with “correct consumer labeling of all settlement products,” followed by EU and national governments eventually banning “imports of settlement products,” excluding “settlement products and companies from public procurement tenders,” and preventing “financial transactions to settlements and related activities.”

The recent creation of a new ministry in the Israeli government that is specifically designed to handle tactics of the BDS movement reveals that the BDS threat to Israel’s economy is serious, Israeli affairs analyst Anton Shalhat said Tuesday.