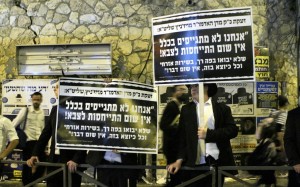 [Photos below.] Hundreds attended various demonstrations today across Eretz Yisroel to protest the arrest of a yeshiva bochur who refused to go to an IDF enlistment offices when summed to do so, in accordance with the guidance of Rav Shmuel Auerbach.

The protests took place in Bnei Brak, Modiin Illit, Beit Shemesh and Ashdod, among other locations.

The bochur, Eliyahu Cohen, a talmid of Yeshiva Orchos Dovid in Yerushalayim, was originally arrested in March for failing to report. Eliyahu is said to currently be in the IDF Prison Six facility near Chaifa and has allegedly started a hunger strike.

Eliyahu received an enlistment order last month. He refused to enlist and was imprisoned for 20 days. He was then released and asked again to report. Again he gain refused and was arrested again.

See below for photos of the protests: