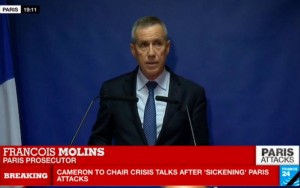 Five were killed in another shooting near a bar, Molins said, adding that 100 rounds were fired.

Terrorists entered the Bataclan during the middle of a concert and began shooting, mentioning Syria and Iraq as they killed. Three terrorists blew themselves up inside the Bataclan. Eighty-nine people died there, with many others injured.

Three people in Belgium have been arrested related to the investigation, Molins said. Read more at France 24.