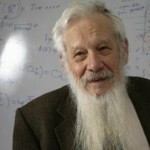 Nobel laureate Professor Yisrael Aumann has an idea that could turn the tables on Hamas’s rocket terror against Israel.

Arutz Sheva reports that in a recent lecture, he described his vision for a fully automatic system that would fire a rocket back at Gaza immediately, whenever Gaza terrorists fired a missile at Israel. Presumably, these missiles would be randomly or automatically aimed in a way that would inflict civilian casualties on the Arab side, just as Hamas seeks to cause civilian casualties on the Israeli side.

Asked about the idea in an interview by NRG, Aumann said: “I’m working on it. The goal is truly that the system will be without any human involvement, no human control. This is very important, because if there is control, they will tell us that we are criminals and murderers and cruel.”

However, he explained, if there is no control of the system on the Israeli side, the responsibility for civilian deaths caused on the Arab side falls on the people who fired the missiles that set off the Israeli system. Arutz Sheva reported that Prof. Aumann compared this to a situation in which the Arabs “take their women and children and force them to walk through a dangerous minefield.”

Prof. Aumann, a mathematician, is a professor at the Center for the Study of Rationality in the Hebrew University of Jerusalem in Israel. He received the Nobel prize for economics in 2005 for his work on conflict and cooperation through game-theory analysis.