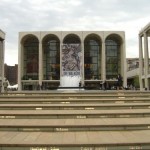 About 400 people protested outside the Metropolitan Opera in New York City on Monday against the premiere of the “The Death of Klinghoffer,” an opera based on the 1985 murder of Jewish passenger Leon Klinghoffer aboard an Italian cruise ship that had been hijacked by terrorists from the Palestinian Liberation Front. The opera has been heavily criticized for glorifying Palestinian terrorism and giving a platform to anti-Semitic stereotypes.

Monday’s rally was organized by Jewish and Christian groups, including the Zionist Organization of America, One Israel Fund, One Family Fund, Simon Wiesenthal Center, and Catholic League. The protesters shouted “shame on the Met.”

“If you listen, you will see that the emotional context of the opera truly romanticizes the terrorists,” said Giuliani, the Associated Press reported.

The premier performance of the opera took place as scheduled Monday night, eliciting a few boos. One person from the audience shouted that “the murder of Klinghoffer will never be forgotten!” But the performance ended with a standing ovation.