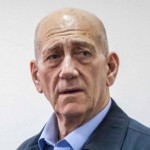 Ehud Olmert was one of eight former officials and businessmen convicted in March 2014 in a corruption case officials have characterized as the largest in Israel’s history.

While it struck down one bribery conviction in Olmert’s case, it upheld another, reducing the former prime minister’s sentence from six years to 18 months. He and others convicted in the case will begin to serve out their sentences on February 15.

Olmert was convicted of accepting bribes when he served as mayor of Yerushalayim and as minister of industry and trade, in exchange for helping win municipal approval for the Holyland residential development near the capital’s southern Malcha neighborhood. Read more at Times of Israel.