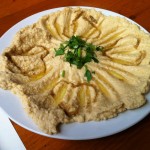 Ever since news about Indian President Pranab Mukherjee’s visit to Israel broke out, analysts and diplomats have been breathlessly awaiting developments.

However, news from his Israel-Jordan visit took a hilarious turn when his attempt at bonding over Israeli cuisine shocked many in the audience. During his speech at Knesset, the Indian president pronounced Hummus as Hamas, the terror group.

“Indian population enjoy the taste of hummus, an Arab food item,” Mukherjee was quoted as saying at Knesset. He pronounced it as Hamas, the Palestinian terrorist group in Gaza Strip and the sworn enemy of Israel.

The comment may just have left a bad taste in his listeners’ mouths.

Pranab Mukherjee arrived in Yerushalayim on Tuesday after visiting Jordan and the areas of Israel where Palestinians live.